A compilation of about 20 minutes of raw news and police footage from the 1990-03-20 Wherehouse record store incident exists in Warner Brothers' record library. Notably, one news channel's interview between Los Angeles city councilman Zev Yaroslavsky and KROQ radio DJ Richard Blade appears at the end of the video. 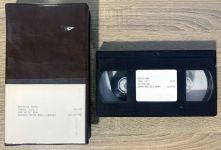