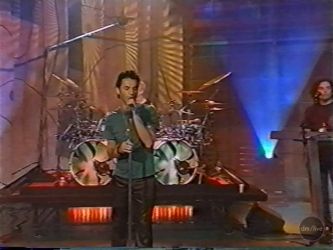 Depeche Mode performed I Feel Loved on The Tonight Show with Jay Leno on August 7, 2001. This video contains three minutes of stage set up, the first rehearsal take, about 12 minutes of the band waiting around, the second rehearsal take, and finally the broadcast version, including Jay Leno's introduction of the band and a brief segment at the end of the show. Following the conclusion of the show, the tape contains a short video of a photo session with Jay Leno, the band, and the other guest stars.

The video quality is excellent as it is sourced from a VHS labelled as a dub off NBC's copy, so presumably it is a first-generation tape. However, the audio is mediocre quality, with high-pitched ringing and other nasty noise throughout. This has been cleaned up with decent results, but some of the noise is still present to avoid damaging the audio too much. For the portions of the video between rehearsal takes, the audio is silenced as all that was audible was the nasty tape noise.

This videotape has been captured with professional equipment and optimized for best viewing in your web browser.

You can watch this entire recording below. Note that the first three minutes are silent, as described in the Notes section above, and then there are 12 minutes of silence between the rehearsal takes.