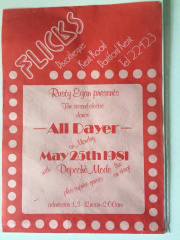 Other than the concert poster to the right, nothing else is currently known about this concert. I contacted Rusty Egan asking if he might have any memorabilia from the concert and this poster was all he had. I also inquired whether this concert or the earlier one at Flicks on March 30th was recorded in any way, and presumably neither was since Rusty did not mention anything about any recordings. Many thanks to Rusty for providing the poster photo!