From DM Live - the Depeche Mode live encyclopedia for the masses
< 1981-10-23 Something Else, BBC2, London, England, UK
Jump to navigationJump to search

A good sounding soundboard recording. This audio is significantly better quality than any previous version available, except for the two tracks that were broadcast on BBC2 (Tora! Tora! Tora! and Photographic) and appear on the Depeche Mode Television Archives TVA-81-1 DVD. The first 45 seconds of Television Set are messed up on the tape so there's noticeable speed variation, there are some occasional slight dropouts throughout, and the hiss is a bit loud, but otherwise this is a nice upgrade. I hard limited some loud claps and loud beginnings of songs so the recording would normalize better overall, and applied automatic click removal since there were some clicks and pops on the tape.

This audio is sourced from a time-coded VHS tape. It is most likely a working copy used by BBC2 during editing. The rumor is that the tape was "borrowed" by an employee and copies were made - and here we are again, 35 years later. Tora! Tora! Tora! and Nodisco are repeated at the end of the tape.

Nodisco is a unique performance because different keyboard mistakes are made during each take. Compare both takes at 1:28 where Dave sings "this ain't no disco" - the keyboard melody starts off on the wrong note but is corrected on the first take, but is correct from the beginning on the second. Also, on the second take at 1:25, someone fat fingers a couple keys, but the first take is fine.

Tora! Tora! Tora! is the same as the first performance, just shot at a different camera angle. The version broadcasted on television uses the second take.

Unfortunately, the video on this tape didn't fare so well: there are red and green horizontal lines any time there's bright red or green lighting used, and it's very detracting to the video. For now, it seems like the horribly low-resolution video with bad audio is still the best video source available for this specific tape - that's available at Source 2.

Depeche Mode Television Archives included the two broadcast tracks, Tora! Tora! Tora! and Photographic, as part of their TVA-81-1 DVD. The video and audio quality is superb, other than a very loud ringing noise in the audio.

This recording is sometimes mislabeled as 1981-11-06 University, Liverpool, England, UK because that was the original broadcast date. Find more info at the main page for this date.

I am still working on tracking down a low-generation VHS copy of this tape, or at least one that is not affected by the red and green lines throughout the video. Stay tuned!

Many thanks to Andrew for lending me this VHS tape. 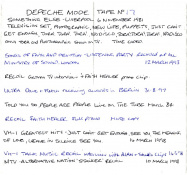