"First on stage were Palais Schaumburg from Germany. A band ahead of their time, they cut across traditional song structures and challenged perceptions with a nod to dadaism and the industrial Avant Garde. Positive Noise were a bunch of guys trying very hard but delivering very little. Their main keyboard player had no less than 3 synths on his keyboard stand while Depeche Mode had only one each. Immediately forgettable, it proved it isn't about kit, its about the songs. The two piece Blancmange, Neil Arthur and Steven Luscombe were the most sparse but considered of all the support bands and proved themselves as serious contenders with an extraordinarily thoughtful, melodic and powerfully delivered set. Depeche Mode gave another note perfect flawless performance."

Dan Silver said in the documentary for the Speak & Spell remaster DVD in 2006:

[...] "Actually, talking of memories, those two nights at the Lyceum were awesome. And I remember pulling the promoter and the hall manager into the venue and pointing at the rear balcony and saying, "Can you see how much that balcony is moving?" Because, it was bouncing up and down, because the kids were bouncing up and down at these two rammed shows. Huge success." 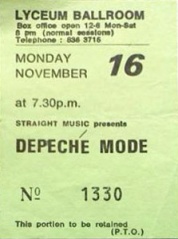