Journalist Gérard Bar-David followed Depeche Mode around on this day for Best magazine, you can read that in French and English here. In that report, it is said that 14,000 tickets were sold and there were 1000 guests. According to promotional posters circulating at the time, the concert was originally going to take place at the smaller Zénith Paris.

Jacques Attali, then the head of Mute France, also followed the band on that day and he told Magic! magazine in 2001 (translated from French):

"I remember when, before the concert at the Bercy on December 17th 1984, Depeche Mode were scheduled to be on the show Platine 45. The filming took place in Boulogne at two o'clock in the afternoon, and they had to be at the Bercy at four o'clock for the soundcheck. At first glance, it seemed undoable. But I did not give up: I called the gendarmerie and asked for the motorcycle service. The guy was giving me a hard time, but since my name is Jacques Attali [like the counselor to the President], he called me again and told me that he was going to me do a favour. He probably said to himself: "Jacques Attali, you may never know if it's really him." The result: he sent two motorcyclers to the studios in Boulogne, and since there was no chauffeur, I was the one driving some kind of van with a motorcycler in front of us and another one behind us. And and never in their life have Depeche Mode been laughing like that: they were pissing themselves because of it. Once we arrived at Bercy, the band offered a beer to the cyclers, and we could no longer keep them around. We really laughed that day. I say "we", because Bruno Rossignol was with me, a guy I had hired for the promotion at Vogue and who succeeded me at Mute France."

DM playbacked two songs on a French show called "Cote D'Amour" in January 1985. Before the performance, the host did a very short interview with them. A recording of this episode was uploaded by someone named 'Jean Marc' on YouTube in 2013, but his account got deleted due to copyright violations. However, a fan also copied it onto their channel. This is a transcript of that interview:

Interviewer: I saw you at Bercy, I had the impression of almost, like, being at a James Brown concert or something, the mass hysteria. Is that what white kids do?

Dave: No, there was black kids as well. If you looked around.

Alan: Actually, there weren't many, were there?

Alan: It was a good - very good concert. We thought it was one of the best on our whole European tour. We were very pleased with it.

Dave: Sort of 'top of the tour' really, we had virtually finished up in Paris, and so the concert was really good. You know, we didn't know what to expect, we hadn't played in France for a long while. And it was a great suprise to us, to see how the fans-

Alan: -The last time we played in France, we probably played to 500 people or something, you know.

Matt Fretton was the support act. 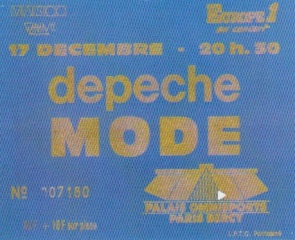