Dave Gahan discusses sobriety, groupies, and the blues roots of Depeche Mode's music in a November 2005 interview for Rolling Stone. 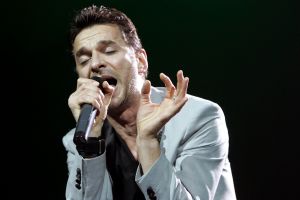 Dave Gahan of Depeche Mode in Concert at the HP Pavilion in San Jose on November 18th, 2005.
John Medina/WireImage/Getty

I‘M JUST A VERY SLOW LEARNER,” says Depeche Mode frontman Dave Gahan, who has his first songwriting credits in the band’s twenty-five-year history on its new album, Playing the Angel. “I was self-conscious when it came to performing my own songs for the guys – it was exposing myself to them,” he adds. “It’s really me coming out of the closet.”

Gahan has been sober since 1996, when he nearly died of a drug overdose – after slashing his wrists in an apparent suicide attempt the year before. “It was all about getting loaded,” says Gahan, who has since married for a third time and fathered a daughter. “The stuff that I loved didn’t seem to matter to me, and that was a terrible place to be.”

Meanwhile, after 2001’s disappointing Exciter, Depeche Mode’s Playing the Angel is a return to synth-rocking form. The band’s upcoming month-long tour of U.S. arenas, which kicks off November and, will include performances of tunes reaching all the way back to 1981’s Speak and Spell. “Those songs certainly feel weird when they go up against what we’re doing now,” Gahan says. “It’s like if the Beatles got together and they pulled out ‘Love Me Do’ up against one of Lennon’s later tunes.”

What was the first album you bought?
The first one that I really got into was either Diamond Dogs or Ziggy Stardust, by David Bowie. Before that – and I’m really dating myself now – it was 45s by Slade and T. Rex and bands I saw on Top of the Pops. I remember seeing the Stones on there as well – my mother tells me I used to walk around the room mimicking Mick Jagger when I was very young. I apparently would get applause and quite enjoyed that. So nothing’s changed in that department.

What kind of music did you hear around the house growing up?
My stepfather, who died when I was, like, nine, played saxophone in a big band. I would sit at the bottom of the stairs listening to this music coming from up in the bedroom. I would hear all this weird jazz music coming out, too, like John Coltrane and Miles Davis, and somehow it spoke to me. But my mother played Johnny Mathis and horrible stuff like that. I had an older sister, and that was even worse – I would hear Barry White and the Stylistics coming from her room. So when punk rock came along, it really did save my life.

What opened your eyes to punk?
I remember my mother being so outraged when the Sex Pistols cursed on TV. I think that’s really what got me going: I realized there was something I could join in with that would really piss my mom off.

When did you start feeling confident that you could sing?
I think that is still a work in progress, I really do [laughs]. I don’t like the sound of my own voice. But I find that if I dig deep in my heart and get more honest about who I am, stripping away the bullshit, then I get to a place that I do like.

After Vince Clarke left Depeche Mode to form Yazoo, did you guys ever sit around and make fun of his records?
I think we were kind of jealous, to be honest. The first song that they had out, “Only You,” was a song he tried to give us. And I was like, “I don’t think so,” And, of course, then it was a huge hit.

How did the folk song “John the Revelator” end up on the new album?
Martin [Gore] brought it in, and at first we were like, “Is it the same as [bluesman] Son House’s version?” Son House is kind of quoting Revelation, and we’re doing the opposite: We’re saying we don’t buy into that idea. When you rip our songs apart, they really are based in a lot of old sort of blues, gospel and spiritual stuff. Whether it’s “Personal Jesus” or “Condemnation” – it’s always there.

So you’re secretly a roots-rock band?
I don’t know, but Martin plays some mean blues, let me tell you. Especially when he’s had a few drinks

Do you listen to a lot of electronic music?
Funnily enough, the music that I enjoy the most doesn’t really use any electronics. Be it Nick Cave or the White Stripes or PJ Harvey or Muddy Waters or Neil Young, you won’t find much synthesizer on any of that.

How did you like Johnny Cash singing “Personal Jesus”?
We were blown away. Actually, Martin was all like [blasé tone], “Yeah, I guess it’s pretty good.” I said, “Martin, this is like Elvis covering one of your songs!”

Your heart stopped in 1996 after you OD’d on a speedball. Do you remember anything from that near-death experience?
What I really felt was this overwhelming feeling of whatever it was I was doing to myself was clearly wrong. And all I really saw was blackness. I was kind of a goner. That was the start of me trying to do something different with my life.

What was your oddest groupie encounter?
That would probably be in Japan, where they have strange groupies that follow you everywhere. You think you’re their favorite, then after you’ve kind of, you know, engaged in the debauchery, they will pull out photo albums of all their other conquests. And suddenly, to your horror, you see pictures of just about every other band that went to Japan over the past ten years.

Like Cheap Trick or something?
Every band you could think of. And you’re like, “Whoa! OK, so I’m not special.”