Dave Gahan, Martin L. Gore and Andrew Fletcher discuss sobriety and how it has affected the way they record in a May 2009 interview for CNN.

LOS ANGELES, California (CNN) -- On a recent day in Los Angeles, hordes of Depeche Mode fans made their way toward the intersection of Hollywood and Vine for a free concert by their heroes on "Jimmy Kimmel Live." 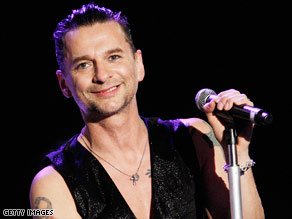 Most were clad in black T-shirts and black pants -- the uniform of the true Depeche Mode devotee.

The three members of Depeche Mode are still partial to wearing black, but their attitude is a lot lighter and brighter than their music and history would suggest.

Thirteen years ago, singer Dave Gahan famously died from a drug overdose and was brought back to life by paramedics at the Sunset Marquis hotel down the road. Since then, he's given up drugs and taken up yoga and songwriting, the latter being what used to be the exclusive domain of guitarist Martin Gore (who has since sobered up himself).

It's changed the dynamics of the trio, known for such hits as "Personal Jesus," but in a good way, says Depeche Mode keyboardist Andy Fletcher.

CNN spoke to the group's members about Depeche Mode's new album, "Sounds of the Universe," their three decades in the business and the effects of heavy drinking. The following is an edited version of the interview.

CNN: Have you looked outside the window to see the street closures out there, and 10,000 people gathering?

Andy Fletcher: (All three members laugh) It can't be happening. It's not anything to do with us. U2 are probably in town.

CNN: Closing down the street for a free concert is a big deal in Hollywood.

Dave Gahan: When we were first approached to do it, we were kind of in some trepidation about what it was really going to be, and if people were going to show up.

CNN: Were you afraid that only two people were going to show up?

Gahan: Well, we're always like that -- until we actually go on stage and see the people.

CNN: I can't believe it's been almost 30 years since Depeche Mode first formed.

Gahan: I think next year is our 30th year.

Fletcher: To be honest, I think at first when we found out it was going to be 30 years, I think it was, "Oh my God, how embarrassing. We're really old!" But I think now we've really got our heads around it, and I think it's something to be actually proud of.

CNN: On your last album, "Playing the Angel," there was a little tension because Martin, for the most part, had written all of the songs -- and Dave wanted to contribute to the writing process. But on the new CD, "Sounds of the Universe," it seems as though everybody was more comfortable sharing songwriting duties.

Gahan: When I kind of approached the band with a whole bunch of demos and said, "I want half the songs on the record," of course that didn't go down well (on the last album). I was a little bit overconfident, as well. But to me, it was just the excitement about this new thing, which was writing. There's no way I could go back to not being involved in the writing.

Martin Gore: To be honest, I think it's one of the big factors in Depeche Mode being much stronger now, and being better. I think Dave is a great frontman ...

Gore: ... and singing someone else's lyrics, he's great. But I think now he really believes he contributes so much more to the band. So I think it's made the band -- the atmosphere between us -- much better, actually. So it's been a good thing.

CNN: Martin, you've given up drinking.

Gore: Yeah. It's been about three years now. It makes a big difference.

Gahan: He is a changed man. There's a different side of Martin that has always been there, but sometimes it gets clouded when the drinking and stuff becomes more important than anything else. I think it got to that phase on the last tour, and Martin was the one that stood up and said, "You know what? I've got to stop this." It's sort of one of those cliches, one of those myths, that you have to be really messed up to do something cool artistically.

CNN: Did you believe that?

Gahan: Yeah, I did for awhile. Yeah. When it's not actually producing anything creative at all, you're in trouble.

CNN: So Andy, in the meantime, you've got two sober bandmates over here.

Gahan: It's good for me, as well. (Gahan and Gore laugh heartily).

Fletcher: I've cut down but --

Fletcher: These things are happening to make the atmosphere better. So it's got to be good.

Fletcher: He also worked very hard on his drinking. (Everyone laughs). You know, when it takes over, it's not funny anymore. But in the studio, when we made this record, Mart was the first there and the last to leave, and worked really, really hard, was really focused -- and that was a joy to be around. It felt great.

Gore: I used to put in, like, maybe three hours and then have to go home on the last hour.

CNN: Do you feel there's less tolerance for that type of excessive behavior in music these days?

Gore: I think being in a band is probably the only job when you're actively encouraged to be out of it most of the time. You know, people like seeing people in bands being messed up. And, you know, people are always buying you drinks. They want to see you like that.

CNN: So what do you tell them now?

Gore: I just -- I don't go out that much anymore. (Everyone laughs)

CNN: You stay and do yoga with Dave, right?

Gahan: Not yet. We haven't gotten to that phase yet. That's a bit scary -- to start doing yoga together.

Gahan: It takes a lot of hard work, and it takes a lot of discipline as well, to continue doing this. You've got to somehow learn to enjoy doing this. There's different phases over the years of the three decades. When we started out, we were barely out of our teenage years. Of course we had a lot of fun for many, many years -- going out to parties, and clubs and bars. But, you know, there comes a time when you have to draw the line.