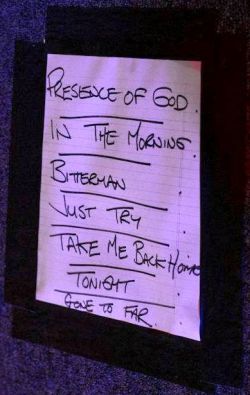 In 2012, Dave Gahan and Soulsavers showcased their collaborative album for a one-off performance at Capitol Records in LA. Only 75 lucky fans who won tickets through contests were able to witness the concert. Two brief, low-quality smartphone video fragments had appeared on YouTube soon after. The entire performance was recorded, and hosted by rollingstone.com in December 2012. The original upload was removed about a year later (presumably because the performance was put on a deluxe pressing of the album later on). The video has been mirrored by many fans on video hosting sites.

"We did this small show in Los Angeles a couple of months ago in the Capitol studio building, which was great. Really small, 150 people. We filmed it and recorded it. Hopefully you’re going to see that popping up on some kind of TV show somewhere. That’s almost been finished editing. The music’s pretty much as it was. Rich left it alone. It’s pretty cool. We had a bunch of guys playing with us. Tony [Bevan] and Kevin [Bales] from Spiritualized, who played drums and guitar. And Sean playing keyboards. It was fantastic. And a guy I had never met before, this guy Aaron, played some extra guitar stuff. He was fantastic. And, of course, Rich. Hopefully you’ll be seeing it somewhere. I don’t know all what is happening. I’ve got no idea. But I’ve seen some footage, and it’s very cool. The whole night was actually very cool. Completely nerve-racking. I think I actually say during the performance that I don’t think I’ve been this close to people for a long time. [Laughs.] Literally, I could feel them breathing on me; it was that close. I like a little bit of distance between myself and people, to be honest. In general, I’m not the most social of people. I’ve gotten used to playing on those sort of stages, but this was something else. I don’t think I’ve been that nervous… before this performance, Rich said I didn’t show it, but inside, I got to tell you, there were some butterflies going on, I must say. It was [a far cry from performing at the Los Angeles Coliseum]. It wasn’t so far in distance, but it was definitely a different experience. I really enjoyed it. It was really thrilling. This is pretty amazing. And we pulled it off. We literally got together and did a day’s rehearsal in Hollywood the day before. I was out recording in Santa Barbara with my band, so I split for the weekend and did a little bit of moonlighting, which was fun. And the band was totally cool with that. Martin and Fletch were like, “Go knock yourself out.” It was actually really something cool, because when I went back in the studio, I actually felt very invigorated."

Credit to Andy McMinn for the video.