Dave Gahan discusses his sobriety, performing with Soulsavers, and balancing life in Depeche Mode with a solo career in an October 2015 article for The Guardian.

The Depeche Mode frontman on Jeremy Corbyn, spiritual advice, his work with Soulsavers, loving Lana Del Rey and the power of Judge Judy 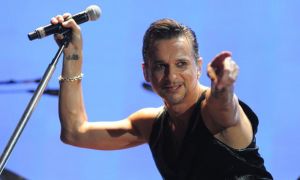 Hi Dave. In the 80s, you once ended a show with 40 audience members’ shoes on stage. When did someone last throw a shoe at you?
Yes, there was a phase, and one particular venue in Los Angeles, the Palladium, where people would just throw shoes on stage. I don’t know what that was all about. I remember one particular gig in the early 90s with Jane’s Addiction, where Perry Farrell caught a shoe, smack in his fucking face. We’ve had some strange things on stage over the years. A lot of the time it depends on what you’re talking about in the press – there was a horrible period in the 90s where people would throw bags of drugs on stage.

What a waste.
Not a good idea. But it was probably all garbage (1). I don’t know what it was, the roadies would run around picking it all up.

Yeah, I bet they would.
(Laughs) Yeah, exactly.

Who’d be the best bet to direct your next video: Anton Corbijn or Jeremy Corbyn?
I’ve read about Jeremy Corbyn. I actually like what he talks about. But I don’t think he’d be very good at directing a video, so I’ll go with Anton. I know he’s going to deliver.

Do you still have a spiritual adviser (2)?
Listen, I’ve got to tell you, I’m constantly seeking spiritual advice. We should all be. I don’t know what it is or where I’m seeking it from, but I constantly seem to be searching for “Why am I here? What am I doing? What am I supposed to be doing, and why aren’t I doing that?”

Well, the reason you’re here right now is that you’ve done your second album as the vocalist in Soulsavers (3), and you’d like to promote it.
We never really stopped writing after the first Soulsavers album. Even when I was on tour with Depeche, ideas would pop into my head. At the end of that Depeche tour I spent a bit of time staring at the walls, as you do, but this time it seemed more severe. I felt a tremendous sense of loss. “It’s over.” It hit me pretty hard. So I sat around moping for a bit, and when Rich from Soulsavers started sending me music over, I started to find working on it quite therapeutic. I started to write myself out of the hole I’d fallen into.

Is working on Soulsavers when you’re with Depeche Mode a bit awkward? There you are on tour and your phone goes off: “Who’s that?” “NOBODY!”
There is a bit of that. I saw Martin [Gore] (4) recently in Los Angeles and we had a nice time, and we chatted about stuff. He sort of… asked a few questions. It’s like, “You’re sort of cheating on us” (5). But I think there’s room for everything. It’s difficult for other people to get their heads around it. I just know that I need to be doing this.

What’s the best song you’ve ever recorded?
With Depeche Mode the one that always sticks out in my mind is Condemnation from Songs of Faith and Devotion (6), just because for me it was a real turning point in finding that I had a voice. I found my voice on that song.

What’s your favourite song in the charts now?
Oh boy. I have no idea what’s in the charts, but I get to hear things vicariously through my 16-year-old daughter. She played the last Lana Del Rey album to death, which I enjoyed.

You seem to be in a four-year cycle of Depeche album and tour, side project, Depeche album and tour, side project. After 25 years, don’t you just want to put your feet up and watch Judge Judy?
Well I do do that. I do sit around watching fucking Judge Judy or whatever. But there’s only so long I can do that. I try desperately to do nothing – it seems like a good idea at the time. But I get into a weird place if I’m not doing things. My wife will indulge that for a while, then she’ll tell me to go and do something. Sometimes it’s good because it enables me to write my way out of it.

What will the next Depeche Mode album sound like?
That’s the million dollar question, mate. The exciting thing is I have absolutely no clue. That always seems to be the case. Martin and I will sit down later this year and we’ll talk about it. But we can do whatever we want, and it would be a sin not to explore that. 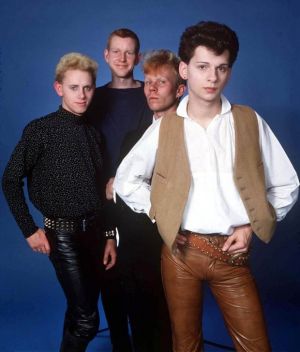 Do you have a Christmas jumper?
I did not…

Did not?
Well. I spent last Christmas with my mum, my brothers, my sister and their respective families on the Isle of Wight. And my sister insisted that everybody wore a Christmas jumper.

Incredible.
There is a photograph out there somewhere of the whole family, lined up outside my mum’s house, in these jumpers. Mine – which was bought for me – was a jumper that looked like a suit and tie. It was ridiculous.

Can the Guardian have the picture to accompany this article?
I’ve threatened all of my family – if this picture gets out, I’m never talking to them again. But it’s actually kind of a nice picture, to be honest.

Footnotes
(1) Garbage is American for rubbish. Dave lives in New York, in an apartment that looks out over the Hudson River. Sometimes he just sits and watches boats come and go.


(2) Depeche Mode’s manager, Jonathan Kessler, was credited as spiritual adviser on the Songs of Faith and Devotion live album. It was, Dave says now, “slightly tongue in cheek”.


(4) In 2013, Gahan revealed that Gore had recorded a track with Frank Ocean. The song has yet to materialise, but it must just be a question of time.


(5) This is a rum old do considering that in 2012 Martin hooked up with an ex, and recorded an entire album with Vince Clarke.