Former KROQ-FM DJ Jim "The Poorman" Trenton recalls his experience during the Wherehouse record store incident in a piece for OC Weekly. 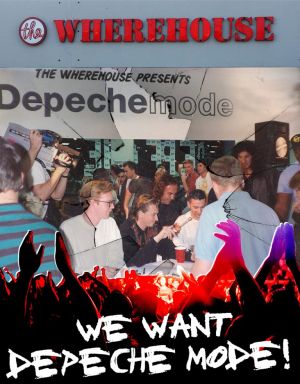 On Tuesday evening, March 20, 1990, I was part of one of the most insane radio station promotions of all time. What happened was something beyond even the wildest of comprehensions. The scene was one you might see in a futuristic movie culminating in an anarchistic government takeover. It amounted to me getting suspended by the radio station. More than that, it was a night that will live on in infamy forever. Welcome to the story of the Depeche Mode Riot.

The key players in putting this promotion together were Los Angeles radio station KROQ-FM (my employer at the time), Mute Records (Depeche Mode’s label) and The Wherehouse, a record and video store chain. They set up an “in-store” for Depeche Mode a day after the release of their new record Violator. The plan was to have the entire English band attend. That would be Dave Gahan, Martin Gore, Andy Fletcher and Alan Wilder. The Wherehouse Records store across the street from the Beverly Center on La Cienega Boulevard and 3rd Street in Los Angeles was the location where this all would happen. Fans would get in line, be let in a few at a time, and the band would then sign copies of their new release and other DM memorabilia from 9 p.m. to Midnight. KROQ would massively promote Depeche Mode’s appearance at The Wherehouse for the week leading up to the in-store, and broadcast live from the venue while the band was there. A few security guards were hired, and everything seemed simple enough. Nobody in their wildest dreams anticipated the hysteria that would take place!

While there was no denying Depeche Mode’s massive popularity around the world, there was equal agreement that they were the most popular in Los Angeles. Less than two years earlier, the boys headlined the Rose Bowl in front of a crowd of 65,000. I was there backstage and onstage, making announcements and firing up the crowd along with my fellow KROQ jocks. I say this to give you a backdrop as to what some of us were thinking as the night of the in-store drew closer. Word started circulating around the station that Depeche Mode might draw 10,000 people to The Wherehouse. The store couldn’t hold more than 150. I hosted a live weekday music TV show at the time on local Orange County station KDOC entitled Request Video. Gore, the band’s songwriter, keyboardist, guitarist and singer, phoned the program a few days prior to the appearance, and I discussed the possibility of a big crowd with him. Martin was hoping there might be a bit of “mayhem” but cautioned everybody who said 10,000 people would show up that “it might be a disappointing turnout.” Boy was he wrong! This interview with Martin from the Request Video studio can be seen at the band’s official Vimeo account entitled Depeche Mode. My interview (included without my permission … nice bootleg, guys!) is at the beginning of their “Archives Special-The Wherehouse In-Store (March 20, 1990).”

There was real excitement in the air when the big night finally arrived. Even though it was a Tuesday, the electricity had the feel of a Friday night. All the top KROQ jocks were in attendance at The Wherehouse. The new KROQ morning show team, Kevin and Bean, made an appearance. They had barely been on the job a month. Jed The Fish was hanging out. Spacin’ Scott Mason (R.I.P.) was handling the engineering, while Richard Blade conducted an exclusive live remote broadcast and interview with the band from inside the venue. I arrived in my 1989 Ford Mustang GT convertible with my girlfriend and future wife Jennifer Lissoy (now remarried) and my intern Chris Schneider. Luckily, we parked a few blocks away. At 8 p.m., the crowd gathering around The Wherehouse was already massive. Thousands of people were waiting in line to get autographs from the band. Some had been camping out since the night before. I was told the line stretched from La Cienega down Beverly all the way to Fairfax. That’s at least a mile long! My job that evening was to capture the action with the Request Video camera crew (you can see them in the picture accompanying this article and their work can be viewed during several interviews I did in the aforementioned Depeche Mode video chronicling the insanity). The band arrived at 9 p.m., barely able to escape the wild crush of screaming, cheering fans surrounding their limo. As it pulled up to the entrance on La Cienega, half a dozen security guards guided band members safely inside The Wherehouse. The dichotomy between the wild, loud and crazy crowd outside was in sharp contrast to an almost library-like quiet inside The Wherehouse where Dave, Alan, Andy and Martin were seated at a long table signing autographs for an orderly procession of a few lucky fans filing by. Dave was sipping on a Rolling Rock beer as I interviewed him. I first asked, “Did you hear the crowd estimate from LAPD?” He responded matter-of-factly: “Yeah, 17,000.” I then mentioned, “You guys always come up with something here in L.A. How could you top the Rose Bowl (concert)? But this just might have topped it!” He responded, “It’s not even something planned. We were asked to do an in-store. It seemed like a good idea, since we weren’t doing any gigs at the moment. We never even expected this kind of turnout.” I asked him if this could create a precedent, since big bands don’t usually do record signings. He responded, “Well, we do.” I’m not sure if they’ve done another one since!

The live remote broadcast on KROQ combined with numerous announcements on all the major Los Angeles news stations of the Depeche Mode in-store fueled the size of the crowd, and the hysteria of the fans waiting outside The Wherehouse to get autographs. It was obvious most of the 17,000 people weren’t going to get something signed inside. The crowd decided to force its way in. The faces of hundreds and hundreds of fans were squashed up against the plate glass front windows. Some were turning red and coming dangerously close to shattering the window panes. The crowd even bum rushed one of the doors, and at least 10 security guards and Wherehouse employees had to push the door shut. By 10:15 p.m., things had become so out of control outside that it was no longer safe for the band to sign autographs. They were whisked away into a back room, and they eventually made a safe exit out of the building. At that point, I decided to hightail it out of there with Jennifer and Chris.

Once we were outside, things really got scary. Directly above The Wherehouse was a four floor parking structure. As we exited, Jennifer described what she saw. “It was pretty scary! When it was announced that the band wasn’t signing any more autographs, people were pissed and angry. They were in line for hours and hours. It sucked! The crowd began banging and shaking the windows. Thousands of crazy, drunk people were throwing bottles from the top of the parking structure. We immediately were dodging a rain of flying whiskey and beer bottles. It was insane!” It got even dicier once we ran onto La Cienega Boulevard. Thousands and thousands of DM fans were going crazy everywhere, running through the streets like a mad mob. Numerous people were perched in trees while others were jumping up and down on news vans and electrical power boxes. They were breaking car windows and destroying property everywhere. La Cienega was barricaded by a combination of at least 100 riot police who were holding shields and billy clubs and linking arms. There were also cops on horseback and police helicopters circling overhead. Despite their presence, they allowed the crowd to get crazy. It was a nightmare for us to find a safe exit to get back to my car parked a few blocks away. Amazingly, there were very few arrests. It was a miracle there weren’t any deaths and few serious injuries.

This is where the story gets really interesting from a personal point of view. The next night, Wednesday, I was back on the air on KROQ doing my 9 p.m. to midnight regular weekday airshift that Blade had covered the night before with his live remote from The Wherehouse. I decided to ask the listeners who were at The Wherehouse the night before to “call my show if they had been injured.” I remember putting a bunch of callers on the air, including one girl who claimed she had broken her leg. This was not smart. KROQ, Mute Records, and The Wherehouse were very afraid they were going to get sued. Here I was helping them to realize those fears.

The following morning, Thursday, I was suspended from my radio show for at least the rest of the week. I was very afraid I’d be fired. At that point, I decided to leave town. Jennifer and I drove up to San Francisco for a few days. We saw Sean Connery and Alec Baldwin in the movie The Hunt for Red October. That’s about all I remember from the trip other than I didn’t get fired and was back on the air the following Monday. Amazingly, nobody got sued. That’s probably what saved my job. Now here’s the real interesting part: We left for San Francisco on Thursday the 22nd and didn’t return until Sunday the 25th. Exactly nine months later and married by then, my one and only son Nick was born on Christmas Eve, Dec. 24. Now I’m just sayin’ …