Depeche Mode - Commemorative CD (BONGFAN1) is an interview CD included with the BONG Magazine, issue 50, containing previously unheard answers to interview questions posed by BBC London 94.9 FM's Tony Wood. This interview was used for a two-hour documentary made by BBC London on 2001-05-07.

Below is a transcript of page 5 from the BONG 50 magazine issue which explains the contents of this disc. 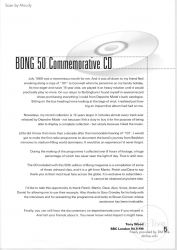 July 1989 was a momentous month for me. And it was all down to my friend Neil sneaking along a copy of 101 to Cornwall when he joined me on my family holiday. As two eager and naive 15 year olds, we played it on heavy rotation until it would practically play no more. On our return to Nottingham I found myself in several record shops purchasing everything I could from Depeche Mode's back catalogue. Sitting on the bus heading home looking at the bags of vinyl, I realised just how big an impact that album had had on me.

Nowadays, my record collection is 12 years larger. It includes almost every track ever released by Depeche Mode - not because I felt a duty to buy it for the purpose of being able to display a complete collection - but simply because I liked the music.

Little did I know that more than a decade after that memorable hearing of 101, I would get to make the first radio programme to document the band's journey from Basildon minnows to stadium-filling world domineers. It would be an experience I'd never forget.

During the making of the programme I collected over 8 hours of footage, a huge percentage of which has never seen the light of day. That is until now.

The CD included with this 50th edition of Bong magazine is a compilation of some of those unheard clips, and it is a gift from Martin, Fletch and Dave to say thank you to their most loyal fans across the globe. It is exclusive to subscribers - it cannot be obtained anywhere else.

I'd like to take this opportunity to thank Fletch, Martin, Dave, Alan, Vince, Anton, and Daniel for allowing me to use their excerpts. Also thanks to Gary Crowley for his help with the interviews and for presenting the programme and lastly to Shaun Connon whose assistance has been invaluable.

Finally, you can still hear the documentary on depechemode.com if you missed it. And tell your friends about it. You never know what impact it might have. 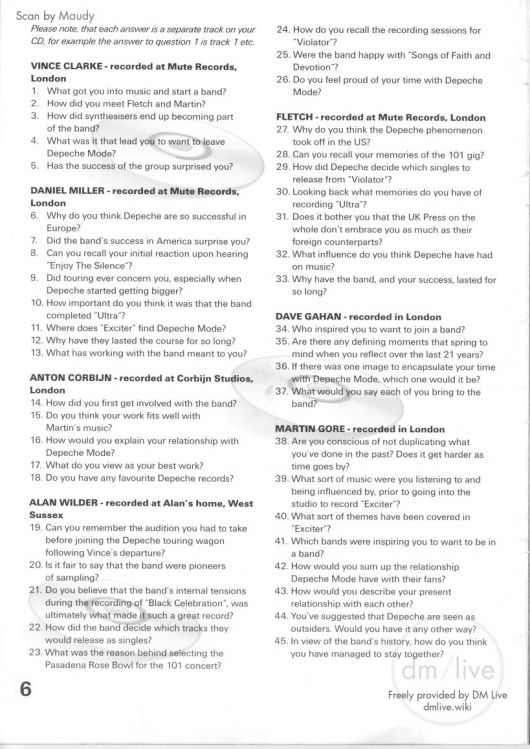 19. [1:21] Play Can you remember the audition you had to take before joining the Depeche touring wagon following Vince's departure?
20. [0:55] Play Is it fair to say that the band were pioneers of sampling?
21. [1:08] Play Do you believe that the band's internal tensions during the recording of Black Celebration, was ultimately what made it such a great record?
22. [0:33] Play How did the band decide which tracks they would release as singles?
23. [1:05] Play What was the reasoning behind selecting the Pasadena Rose Bowl for the 101 concert?
24. [1:44] Play How do you recall the recording sessions for Violator?
25. [0:58] Play Were the band happy with Songs of Faith and Devotion?
26. [1:05] Play Do you feel proud of your time with Depeche Mode?

38. [0:25] Play Are you conscious of not duplicating what you've done in the past? Does it get harder as time goes by?
39. [0:45] Play What sort of music were you listening to and being influenced by, prior to going into the studio to record Exciter?
40. [0:23] Play What sort of themes have been covered in Exciter?
41. [0:21] Play Which bands were inspiring you to want to be in a band?
42. [0:22] Play How would you sum up the relationship Depeche Mode have with their fans?
43. [0:32] Play How would you describe your present relationship with each other?
44. [0:25] Play You've suggested that Depeche are seen as outsiders. Would you have it any other way?
45. [1:05] Play In view of the band's history, how do you think you have managed to stay together?

You can listen to this entire recording below in one shot if you don't want to keep clicking play on each track, though it may be a little difficult to follow without clear breaks between each answer.