The Plan was a band active from fall 1979 up until early 1980. Robert Marlow is responsible for creating the band, starting out with his longtime friend Vince Clarke, but adding friends Perry Bamonte and Paul Langwith soon after. Robert Marlow describes the band as having been "like an Ultravox rip-off".[1]

Depeche Mode biography author Jonathan Miller erroneously mentions that this band was created just after Vince Clarke had formed Composition Of Sound, but it was actually the other way around. While Robert Marlow and Vince Clarke were good friends and fellow aspiring musicians, they also bumped heads a lot. After Vince had disbanded No Romance In China, and Robert Marlow's band The Vandals had also called it quits, their friendship was in a good place and so they decided to form a band. The most dramatic change in comparison to their previous bands would be their use of synthesisers. While Robert could ask his mother to buy a synthesiser for him, Vince had to work very hard to be able to afford a Kawai 100F. Robert: "I'd been listening to a lot of Ultravox with John Foxx — songs like 'Saturday Night In The City Of The Dead' and 'The Man Who Dies Everyday', songs that had sounds that you could only get on a synthesiser. So I got my mum to take out a hire purchase agreement on a Korg 700 — a fantastic synth!"[2] Vince Clarke adds: "Rob got his synth first; he was the first person I knew who bought one, but his family had bought their own house – they were quite posh, you see. What happened was that Gary Numan did 'Are 'Friends' Electric?' So suddenly we were all turned on to synthesisers. That was what sparked off The Plan."[2] Vince also credits another single that led to the creation of this band: "What motivated me to actually buy a synthesiser was, again, probably Orchestral Manoeuvres in the Dark's [B-Side] 'Almost'... not that I don't like Gary Numan; don't get me wrong, I was blown away by him on Top of the Pops – but OMD sounded more home-made, and I suddenly thought, 'I can do that!' There was this sudden connection."[2] In another interview, Vince names the A-side of the same single instead: "When I was 18 or 19 I heard a single called 'Electricity' by Orchestral Manoeuvres in the Dark. It sounded so different from anything I'd heard; that really made me want to make electronic music, 'cause it was so unique."[3]

Paul Langwith was already a drummer in The Spurts, and Perry Bamonte floated along some local bands including The Spurts at the time. Paul: "Vince was the most serious and the rest of us saw it as a bit of a laugh – any excuse to jump on the instruments and have a bash around. [...] We had come from a three-chord trash-punk band, then all of a sudden we were playing electro-pop songs that were very well structured, organised."[1] 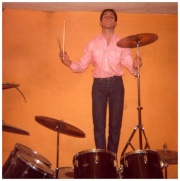 Paul Langwith at his Bungalow

The band would rehearse at Paul's locally well-known bungalow, where he had a rehearsal room. Paul: "All the equipment was set up 24/7 so we used to just go up there day or night and rehearse. [...] [Andy] Fletcher was a good mate of Vince's so he used to tag along to rehearsals of The Plan. [...] We had a cassette recorder in the middle of the room. We actually made quite a few good recordings like that. [...] We had some really good tracks. There was one track we did called 'The Day The Shot The President Down'. Vince was writing all the songs for The Plan. They were very good songs; poppy. If you'd taken them to a producer you could have had hits with them."[1]

The Plan planned to debut at Gary Turner's Baron's night club which was attached to the Elms Club in Leigh-on-Sea, on January 1, 1980.[2] Paul: "[W]e were going to do this gig – I think we'd even hired dry ice machines, strobe lights; it was going to be a real event. But I think somebody got bottled the week before and they closed the pub down. That was the demise of the band, because we'd put all our hands down our pockets to hire equipment and things. We didn't get the money back, and we'd sort of blown all our enthusiasm at that one gig."[1]

Paul believes that the reason for the disbandment lies in the fact that Vince was a lot more serious than the rest of the band: "For Vince, music was a way out of his dead end job. You could tell he was going places, and that we weren't going to go along with him. [...] He had that single-mindedness. He'd already had this vision. He knew what he wanted. And I think Vince had seen through us in the end. He knew what he wanted to do wasn't going to be with Perry and me."[1] While Perry and Paul quickly lost interest in the band after the cancelled gig, Vince Clarke blames the end of the band on creative differences between him and Rob. "All of these bands could have lasted just two days. They're just names. Rob and I always wanted to be in a band together, but we both had such egos. And we had quite different musical tastes. The reason why he and I connected was that we hated each other's music so much! We'd spend evenings just slagging each other's records off while playing them! So any kind of musical connection I had with Rob was always short-lived."[2] Rob, however, gives a more pragmatical reason for the end of their band, when in early 1980, Rob and his friends decided to go grape picking in France, aiming to "go away and be poetic or something[2], go travel and do something,[1], and then I'd save up some more money and get more equipment, more synthesisers and things.[4] We pissed it up down the pub. That's when Vince was harbouring his secret plan for world domination."[1] This secret plan of his would become Composition Of Sound; however Rob was already starting up another band, named French Look.

After the demise of the band, Robert Marlow and Vince Clarke remained in touch with one another, and both continued working as musicians to this day. By 1983, Vince had become more successful than Rob already, and Rob asked him for a favour:

"I tapped him on the shoulder and said "I’ve got some songs, can you give me a day in the studio?” and he went "No, it’s very expensive... I can’t do it” and I was "Please! Please!" Eventually, we did one day and we recorded The Face Of Dorian Gray which actually then went on for about 3 to 4 weeks... after we spent all that time, Vince said “it seems daft just to do a demo, let’s get it released". I was made up and we found RCA who decided to licence Vince’s own label Reset Records and that was it. What happened was four singles and the recording of The Peter Pan Effect album."[5]

Perry Bamonte also became very successful as a guitar player, and is most notable for having been in The Cure from 1990 till 2005.