Depeche Mode interviewed by Anton Corbijn, likely in early 1997. The interview is described by the radio host to be a "Spin Session" courtesy of Spin Magazine and Westwood One Entertainment, which matches up with this Westwood One promo CD, labelled as being for broadcast the week of April 21, 1997. Interview snippets are interspersed between studio tracks, which have been faded in and out from the audio. The FM radio station "Live 105" in California broadcast this audio, but the exact date is not known.

The tape itself plays quite a bit fast, so the cassette deck's pitch control was used to correct the speed. There isn't a lot of dynamic range, but typical modern radio broadcasts don't tend to have much to begin with. Some small bits of the interview segments are missing due to the recording being paused during commercials.

Songs which were broadcast were album versions of the following songs, except where noted:

Many thanks to Dina Marie Robinson for locating the tape and lending it to DM Live to transfer. 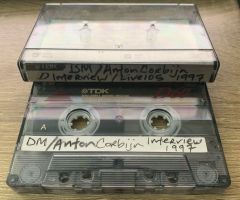