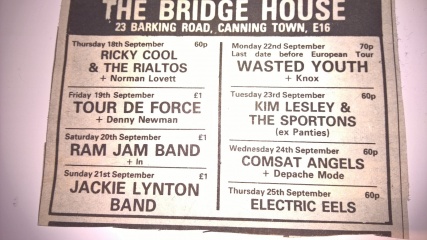 This was the first concert played under the name "Depeche Mode" - or, more accurately, "Depache Mode" as seen in the Melody Maker guide to the right - versus "Composition Of Sound" for prior gigs. This was also their first gig at the Bridge House, and DM were paid £15.[1] They supported the Comsat Angels. Depeche Mode's support act was The Fixx.[2]

I was always looking for new sounds, having started my record company. Then I get this tape from a band called Composition of Sound that was included in a batch of around 20, which I got daily. I quite liked the name, so I played it in my office at the Bridgehouse. I would always have a few of my staff with me to get their opinion. Nobody liked it, except me. I thought it was different and more so, adventurous, because anyone with the guts to send this type of music to a rock pub must be brave and got what it takes to make it. So I told my assistant to book them, give them a gig. My thinking at that time was they come from Basildon, which is down the A13, it was one straight road then and I thought they might fetch a crowd with them. No such luck, only about 20 people came to see them. The pub was capable of packing in over 1000 people, so you can imagine how empty it looked. I spoke to them after the gig giving them their £15.00 fee. Dave said we will definitely pull more of a crowd if you will give us another gig, Vince said yes we have got a residence at Crocs in Rayleigh and they will all come down. I said I did like the band and I will give you some support slots to build a crowd up. This I did and one of the bands I thought would be perfect for them to support was Fad Gadget...”

“When the band played their first gig for me, I am pretty sure that I had advertised it as Composition of Sound. I would put posters all around the pub with the forthcoming attractions, Saturday... Sun... and so on. After the band arrived for their first gig at the Bridgehouse, Andy came and told me that the name they we’re going to use in the future was Depeche Mode. I said, “That’s a French name isn’t it?” He agreed, saying “we got it out of a magazine”. I said, “Good, wish you luck with it”. I carried on talking to them, trying to get the feel of their ambition. Dave told me that he was a regular at the Bridgehouse when Wasted Youth played, it was one of his favourite bands. Darren, the bass player in Wasted Youth, is my son and lived with us above the pub. Lucky his band was having a rest that day, so I called him down to meet and watch the band. He would be able to give me some ideas about the band. I introduced him to Dave who was very pleased to meet one of the band members of his favourite band. Wasted Youth were headlining all over England; Marque, Lyceum, Rainbow, The Venue, everywhere. After the gig Darren said to me that he thought the band (Depeche Mode) was great and I should get them to record for Bridgehouse Records. He said to me, “Next time we play here, give them the support.”[4] Darren also said he would put the word around when they were playing. He also would give out free tickets to their fans to come to the Bridge to see Depeche Mode. This I did not know till much later, so well done Darren, he was a big help in building up the band, but cost me a nice few quid as well.”

"[...] So [Vince and I] rang [Terry Murphy] and he said, 'Yeah, by all means come along.' He only gave [Depeche Mode] a chance for one night, so we got as many people as we could to go down there, and they were a big success! This guy said, 'At least you filled the place out; you can come back next week!'"

Vince Clarke said in the same biography: "[Comsat Angels] were actually better than us. When you're that sort of age, you say you were better, but actually they were probably a lot better."

Daryl Bamonte stated that Depeche Mode was using backing tracks on cassettes by the time of this concert:[5]

"I'm sure by the time they played the Bridgehouse for the first time, they were using cassettes. Originally a separate cassette tape for each song, which Dave had to keep changing. But later the set was all on one cassette, it made the set flow better."

Daryl was also asked whether that meant the set list was fairly static between concerts for a while when the entire set was on a single cassette, or whether there might have been multiple variations of a set list across several tapes; he answered: "I think just one version".