"I occasionally listen to the 24-track tapes we recorded [at Cabaret Futura]. One of my favourites is of Depeche Mode, all cherubic-faced and full of nervy swagger as they tried out their first songs, wonderful three-minute anthems such as New Life, Factory [Ice Machine] or Dreaming of Me. The first time I played the tapes back I was puzzled by what seemed to be a splashing sound on one of the tracks. Then I remembered it was the night that The Event Group did something unspeakable with hoses and fake urine on the balcony while the band played underneath."

As Richard Strange noted in his bio on Vimeo, he paid the band £15 for a half hour set. He also quotes Depeche Mode as having said:

In June 2018, Richard said that the band's performance "was always one of the highlights of Cabaret Futura's history."[3]

According to Baker, Egan then invited DM to play at his club Flicks in Dartford on March 30, 1981. 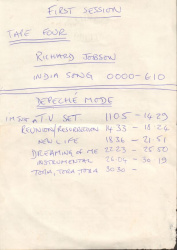 This is the set list that Richard Strange was able to confirm based on his track sheet corresponding with his tape, seen right. According to the track sheet, the tape appears to physically run out during Tora! Tora! Tora! due to Richard Jobson's performance preceding Depeche Mode's taking up the first 11 minutes of the reel. It is likely that Depeche Mode performed two more songs to yield an approximate 30-minute set, which corresponds with Richard Strange's recollection of having paid the band £15 for a 30-minute set, cited above. Our best guess of those songs performed are "Just Can't Get Enough" and "Photographic" in that order. It is difficult to imagine that the instrumental Big Muff was chosen to be performed over those tracks mentioned, if it would've been a shorter 6-song set as indicated on the track sheet. Unfortunately, Richard is unable to recall whether more songs were performed and which those may have been.