The event was notable as Depeche Mode played twice on the same night, playing two identical sets. The first performance was at 17:00h and the second at 20:00h. The early show was organised for under-18s only who couldn't usually enter licensed premises (soft drinks only). Proceeds of this show went to a charity chosen by the band - 'Amnesty International'. The later show was for over-18s only.

From a review by Mark Ellen in the magazine Smash Hits, issue 1st October 1981, as well as a review by Mike Nicholls in Record Mirror, issue 26th September 1981, the following tracks were confirmed to have been played:

Mark Ellen also mentions that What's Your Name? and Puppets were unveiled at the same venue as this concert eight weeks ago at 1981-07-23 The Venue, London, England, UK. 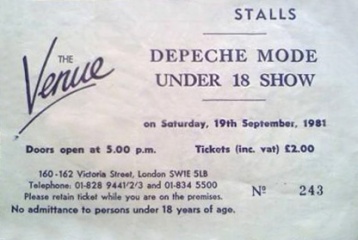