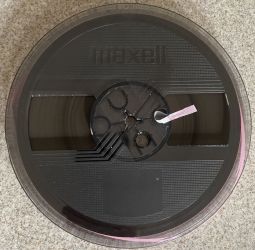 A very good sounding FM broadcast recording. The recording is a little bass-heavy and some songs have a slight amount of distorted bass as a result, but otherwise this is a great sounding recording with only the occasional minor flaw. The radio station which broadcast this segment is identified as WXRT in Chicago, as heard by a short spoken identifier before Ice Machine. This music was broadcast as part of their "11th Hour" segment.

The concert introduction is incomplete. Ice Machine fades in, but no music is lost. There is a break between Master And Servant and Photographic, so the introduction to Photographic is missing the first few seconds. It sounds like the first few seconds of Everything Counts are missing as well, but this is the case even on the transcription disc and the other available FM broadcast recording; only the raw soundboard cassette (Source 2) has the complete introduction.

This audio was speed-corrected using the 19kHz FM pilot tone as a reference. Sliding speed correction was used to bring the pilot tone to about 19kHz throughout the entirety of the recording.

This reel tape was an eBay purchase which cost $39.58 in total. It was hoped that "Blasphemous Rumours" would be present on this broadcast to have an alternate source other than the FM master cassette of the UK broadcast, but unfortunately that is not the case. However, this is still a very good sounding recording, and is worth sharing.

Many thanks to Gerhard at The Vintage Audio for allowing DM Live to use his excellent Teac reel-to-reel to transfer this tape and for assisting with the transfer process.

There are several other recordings from this concert: