A very good soundboard recording sourced from a second generation cassette tape. Rage Mail Order originally sold and distributed copies of this cassette in the early 90s and this is their source tape, so this transfer is likely the lowest generation version that will probably ever be available. This transfer has much less wow & flutter, distortion, and many fewer drop-outs than any other version currently circulating. The clicks which were present for the last third of the recording on some previously circulating versions are also non-existent on this tape. I have confirmed that this tape is second generation via the person who holds the first generation tape; he actually created this second generation tape copy and is a very reliable source. 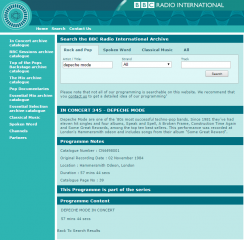 Many tracks have a strong reverb effect on Dave's voice panned to the right channel. Martin's vocals are usually centered, with Alan's always panned to the left channel; Dave's are sometimes centered, sometimes panned to the left channel. The concert intro is missing around 20 seconds from the beginning (a patched version is included), and I have no idea what the short sound before the intro is from (most of it was cut out as it is not relevant). Shame is no longer missing a few seconds from the beginning, but is still missing a few from the very end, presumably due to tape flip. Somebody misses most of the intro ambiance due to the same tape flip; patched versions of both tracks are included. Somebody also drops several dB in the left channel after about 1 minute for the remainder of the track, and a gain envelope was applied to help preserve the channel balance at the cost of temporarily louder tape hiss in that channel; the volume returns to normal for the rest of the recording once the track is over. Ice Machine and forward has slightly better frequency response than the previous half of the recording for some reason, perhaps because that half plays closer to the correct speed on the tape. This tape also has about one third of See You present (only about 20 seconds was available on previous versions), which is otherwise available in its entirety on the pre-FM vinyl and FM broadcast recordings; a patched version of the track is included. "Shout" and "Just Can't Get Enough" are missing entirely from all existing versions, unfortunately. To date, no audience recording from this concert is circulating; in fact, no audience recording from any of the concerts from the four-night stint at Hammersmith is available (if you happen to have one on tape, please contact me!). Some incorrect samples are played during Master And Servant after the last verse. Amusingly, this has been corrected on the BBC pre-FM vinyl. "Live Here Now", anybody? The A-side of the tape cuts abruptly halfway through Shame - about 35 minutes in - with the rest of that side being white noise. This may have been done intentionally, because the additional ten minutes could have been used to provide a complete copy of the recording if the audience breaks were cut short during the encore.

Thanks to Vince DOME, we have included several patched tracks to swap in at your personal preference:

The main folder of this recording is the unpatched version of the audio, speed-corrected and normalized to have the most consistent listening experience. No hiss reduction has been applied. Around thirty small cuts on both the left and right channels were carefully patched using the available undamaged channel, resulting in a short mono segment; most patches are not noticeable.

To answer the question of "why does this recording exist?", the answer is that somebody in the band, most likely Alan, requested a copy for reference purposes and it has sat in the band's vaults since. This reference tape was then borrowed in the early '90s, copies were made, and ... well, here we are again, 20-something years later after copies were being sold! Part of this concert was broadcast over FM by the BBC, so perhaps the band was provided a copy to "pick and choose" tracks they think would be most suitable to broadcast? Maybe Alan asked the sound engineer to record the gig so he could gauge the performance of the band, as he mentioned was done for rehearsals and the first few gigs of a tour (info from Shunt Q&A - see below)? However, this gig was not particularly early as it was the 27th gig of the "Some Great Reward" tour. The most plausible explanation is that Alan wanted to check for mistakes, such as the incorrect samples during Master And Servant I mentioned earlier, and offer his suggestions and comments so that they could be corrected or mitigated during the mastering and mixing process.

"Did DM record all their live shows and then listen to them afterwards for improvement matters?"

"I used to get our sound engineer to record tapes (directly from the mixing board) of rehearsals and the first few shows of a tour. These don't always give you an accurate balance but are good for checking performance etc. Apart from that, we only recorded certain shows (using a mobile) if we were intending a live LP or something."

"I have a soundboard recording from the USA '94 show in San Francisco. I always thought this was done without the bands knowledge/approval but when samples from the recording turned up in that god-awful new remix of 'World In My Eyes' (found on the XLCD of 'Only When I Lose Myself'), I realised that the band must have known about it. Did/do Depeche Mode record several shows of each tour in this manner, and if so, for what purpose?"

Alan's answer: "Sound recordings direct from the front of house mixing desk were only ever made for personal reference reasons."

Note: that particular recording of 1994-05-14 San Francisco is likely taken from a video recording of the giant screen multicam video feed, and such recordings are known to exist for Depeche Mode and many other bands, though in DM's case no actual videos have surfaced as of the time of this writing. It is undoubtedly the case that local sound crews would sometimes tape these video feeds as well as the audio of soundboards to keep for themselves, to sell copies, or to give to friends and family. For example, the 1994-03-26 Honolulu soundboard recording was surfaced by a local sound crew member known for doing the same for many other bands that would visit Hawaii. Recordings of the in-ear monitor feeds to yield soundboard-quality recordings is another modern method of obtaining high quality recordings; the U2 taping community employs this method often with great success, using multiple recorders to obtain the necessary feeds to create a well-balanced recording. IEM recordings of Depeche Mode are few and far between, with the only circulating recording being a 320kbps MP3 version of Peter Gordeno's IEM feed from 2006-01-21 Dusseldorf.

Assistive Listening Device feeds are another method of obtaining soundboard-quality recordings and there are three such recordings of DM (from 1998 Inglewood, a good quality recording of both nights (here and here), and 2005-11-16 Seattle, a flawed recording), but at this point I digress.

Other recordings from this concert

Other great recordings from this concert exist:

Many, many thanks to a kind collector for generously lending me his tape to transfer (twice, in fact - can't thank you enough!) and share. 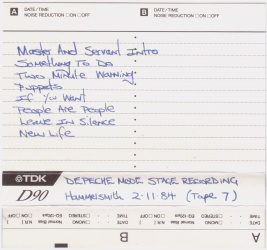 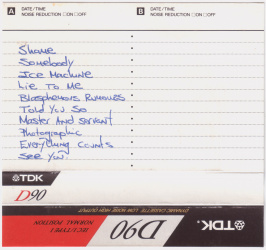 The tape's inlay card, back side.