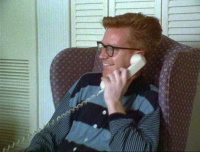 Fletcher during the interview 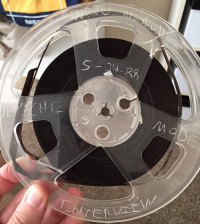 Marc Hill from Nashville's college radio WRVU interviews Andrew Fletcher for his show 'The Alternative Dance Party From Hell'. Fletcher is sitting in his hotel room in the same city, giving the interview over the phone. A fragment of this interview was captured in 101, in which you can indeed hear Andy give the ID greeting: "Hi, this is Andy Fletcher of Depeche Mode and you're listening to Marc Hill on The Alternative Dance Party From Hell", as well as the quote: "Martin is the songwriter, Alan is the good musician, Dave is the vocalist, and I bum around." In September 2017, Marc Hill mentioned this interview in a tweet, and after a short enquiry about it, he offered to digitise his analogue tape recording for DMLiveWiki, to which you can now listen below.