"This was the worst of the three concerts I'd been to, mainly because poor old Dave was staggering around on stage with a bottle and generally looked like warmed-over ass. He screwed up the words to a few songs, which is embarrassing considering how the crowd were singing along."

According to The Boston Globe, the attendance was about 7,300 people with a capacity of 12,000.

Stabbing Westward and Primal Scream were the support acts.

Throb from Primal Scream missed their gig tonight. He claims that it was due to bad traffic. I think it was probably because he was too busy watching the Italy / Norway game. The funny thing was that the Scream didn’t sound any different. I wonder... Brazil are playing tomorrow... taxi... wrong turning... bad traffic... lost me pass... lost me watch... etc. 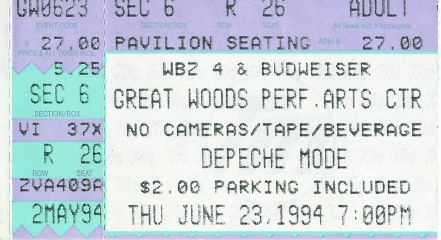