Has anyone had a random and unique opportunity to meet one or all of the band members? Do you have a crazy or fun story that involves you and our beloved DM?! Let me share with you a story of what was probably one of the best days & experiences of my life! I apologize in advance for the length of this post, but as Devotees, I would hope you all enjoy it! Now…“Let Me Take You on a Trip…”

Back in 2001, I had a very rare and unique opportunity in which my ex-girlfriend, her friend and myself were able to not only meet DM, but also spend what would be about 6 working hours with them in the studio. First, let me preface the story for those of you who are not familiar with Southern California and DM’s association with certain areas. Martin Gore is a resident to the community of Santa Barbara, located about 87 miles (140 km) north of Los Angeles, where it’s also the location of the recording studio in which the band has recorded their last 5 albums while on the US West Coast. I live in the greater LA area of Pasadena – of course best known for the home of the “101” Rose Bowl Concert in 1988.

My ex’s father owns a second/vacation home in a small beach town called Carpinteria, which borders Santa Barbara. (Here’s where it gets complicated, so try to follow me here): Well his next-door neighbor’s youngest daughter’s best friend’s dad (with me so far? ☺) is the owner of the recording studio in SB. One day the neighbor was at a school event where she ran into her daughter’s dad (the studio owner) and they started talking about work, life, sports, etc. So the neighbor asked, “How are things in the studio?” With that, the owner responded that they are booked solid with artists, naming off a few, and ending with “and a band from England called Depeche Mode.” Immediately the neighbor said to him excitedly that her “next-door neighbor’s daughter and her boyfriend (referring to my ex and I) are huge fans!” At that point, the owner extended an invitation to have us call him and set up a time to come into the studio to watch the band work! Amazing right!?!?! Of course we immediately jumped at the opportunity!

We set up a time to go up on a Friday. I called in sick to work that morning and off we went! The band had been in the studio for the past 2 weeks rehearsing for their upcoming 2001 Exciter World Tour, and the Friday we decided to go up happened to be their final day in the studio. Here’s where the fun begins…. We drive up early in the morning, as we are full of excitement. We were told to meet with the owner at sometime around 10:30 or 11 AM. We get to SB around 9:30/10AM-ish and wander around looking for the studio, finally finding it, as the building has no markers, signs, windows or anything – just an old building with a door. Now we wait. And wait. And wait. AND WAIT… Nothing, no one, not a soul around! We knocked on the door, and no answer. It was 2001, and cell phones where not a household item, so we had to find a payphone to call the studio. No one picked up. There were no other phone numbers to call (remember this was a time without cell phone luxury as we have today). By this time, it’s probably about 1 PM. I’m sure people who were driving up and down the street who worked in nearby shops and restaurants and seeing us just standing outside on the sidewalk thought we were homeless or lost or whatever. I remember my feet were hurting from standing all morning. We were getting anxious, nervous, cranky, annoyed, and distraught!! Had we been led to believe this was real, but wasn’t? Was this someone’s cruel joke? Were we in the wrong location? Did we have the wrong time and date?? All of these thoughts were going thru our minds, when….

My gf and I were facing in one direction, and her friend was facing the other way, looking at us. Suddenly we see her eyes almost bulge out of her face and mouth fall open. She whispers to us “Don’t turn around, but Andy Fletcher just came out the Holiday Inn Hotel (just down the block from the studio) and is walking this way.” Fletch walks past us and smiles with a little “hello”, and then proceeds through the studio door. Ok! Now we knew we were in the right place!! About 10 minutes go by and sure enough, Martin Gore comes walking out the same hotel and down the sidewalk toward us. He smiles, but doesn’t say a word, and walks into the studio. Ok now our hearts were pounding!!

So about another 15-20 minutes go by and as we are just standing there, pacing and thinking “where is this guy?!!? (the owner)”, we hear a loud sound coming from across the street, which sounded like a dying cat or something. We turn to look and see Dave Gahan, his wife Jennifer, Jonathan Kessler, and lastly Dave’s daughter (who must have been about 2 or 3 years old) in a stroller that Dave was pushing. The loud “cat-dying” sound we heard was Dave trying to sound like a race car or siren or screeching wheels as he pushed his little girl in the stroller, playing with her like any father would be doing. They cross the street to where we were and Dave walks up to us, smiles and says “hello” and then (this part is for all you ladies) leans over the top of the stroller to kiss his daughter whilst his backside is in the air in front of us, clinching every “butt muscle” in his designer jeans. I thought my ex and her friend were going to go into convulsions – as it appeared that he clearly did that for them. HAHA! However about 5 feet behind Dave and us was his wife and Kessler, both looking non too pleased with scowls on their faces. But hey, what can you do, right?

So after Dave, Jennifer, Kessler and the baby go into the studio, there we are once again… WAITING!!, this time probably for another 20 minutes when a car pulls up to the front of the building. Finally, it was the owner! We explained that we got there a little early, but when he asked us to. He apologized as the band’s schedule had changed and he had no way to contact us (remember, no cellphones), however, his engineer and some techs had been in the building all morning and should have let us in. Well it happens that they were in the studio and couldn’t hear us knocking on the door or the phone ringing since it was in the office. No bother, we made it inside!

As we walked into the “green room”/lobby area, we can hear Martin on the guitar playing riffs of “Dream On”, “Personal Jesus” and “Useless”. The owner tells the band and Kessler that he has friends from out of town visiting the studio for the day to see the behind the scenes of what happens in a recording studio. Everyone was fine with it, under one condition – Not to interrupt the band. After all they are “working” and this is their “Job”. So no problem, we go and sit in on the session in the recording booth, watching the band thru the glass. As we make our way into the booth we meet the engineers and techs behind the studio and the band. Everyone is very friendly. In the studio are Dave, Martin, Fletch, Peter Gordeno and Christian Eigner warming up. Dave’s wife, Jennifer, and his daughter are far off in a corner. Kessler was in one of the offices on the phone doing his “Manager duties.”

From here it was a full afternoon of “work per usual” for the band. They take it from the top and run thru their entire set of songs for the Exciter Tour. Stopping between tracks, making notes, discussing backdrops/screen images, stop-and-restarting a few tracks, etc. Fletch came into the booth where we were several times to relay messages to engineers/techs and get the levels straight. “Dream On” turned into a stop-n-go song as Martin was teaching Peter the background vocals for the song. Dave chained smoked between every other 3rd or 4th song and was telling jokes. At some point in the rehearsal, the backup singers, Jordan Bailey and Georgia Lewis, arrived and did their parts in the studio. Lastly, Martin’s first wife, Suzanne, arrived at the studio with their two daughters, Viva and Ava.

When the day was over and the final track was performed, everyone, including us, clapped and congratulated each other for a “job well done”, as they were as ready as ever to head out onto the road and start the Exciter Tour! At this point we were allowed into the studio and chatted with the band in the green room/lobby. Fletch was late for something so he had to bolt out quickly, only after signing a couple of posters for us. Jordan and Georgia left after their parts were completed. The rest of the band, and families, hung out for a bit, asked us for OUR OPINIONs of the day’s rehearsal and if we enjoyed it!! (I think I pee’d a little here HA!). Lastly they signed a couple of posters and posed for pics with us. Finally getting the chance to meet my idols and favorite band was truly one of the best days and experiences ever! We left the studio, stopping in for dinner at the little Mexican Food restaurant so well known by DM fans as it’s the location for the back cover photo on the “Exciter” album (geeking out and taking pics of the table Dave, Martin and Fletch sat at for the Anton Corbjin photo session) before heading back down to LA. 😃

I hope you enjoyed my LONG, but special DM story! Here are photos from the day, blurring out the likeness of the girls to protect their privacy, as well as some privy information at the top of one of the setlists. Oh and the CDs you see on one of the speakers – funny story, Martin had just purchased their entire back catalog on CD from a local record store, so they could go through “alternate songs” they may want to play. Hmm…I wonder what other songs were considered, but didn’t make the cut?? We may never know… 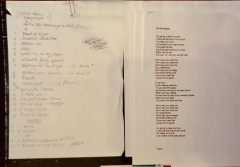 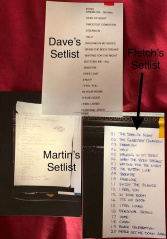