Due to the rain the show started very late. I Feel Loved, Clean and Black Celebration were not played because of the curfew. According to now-defunct DMHotwire.de, the music for 'Clean' starts playing right after 'Home', but then quickly stops, and Dave says "Sounds good, sounds good... kill it." Allegedly, Dave also said at the end of Freelove: "That was the UB-40 version of Freelove. Didn't know we could do reggae did 'ya? Yeeaaaah we do it all!" Marek Lieberberg gave an introduction before the show.

Here is the diary entry from DepecheMode.com:

Leipzig went on the same way with the rain again. Though it was not as bad during the show, people still waited a long time in the rain and seemed to still be excited about the show. This one was even bigger - 70,000 people versus 60,000 the night before.

The guys had to cut a few songs because they were freezing their butts off, but hopefully the audience enjoyed it just the same.

It was awful that our two largest shows EVER had to come with those conditions, but I think that they came off pretty well and the fans would have enjoyed themselves regardless of the weather. As we know, DM fans are so very dedicated - that is why they are great!

Sarah Blackwood from Client (who first called themselves 'Technique' around 2001) stated in 2014:

We supported [DM] in front of 145,000 people in Leipzig, it was one of the first shows with them and I was practically crippled with nerves… and I got out on stage and there was one person at the front with a “Sarah” banner; I was so touched. It’s just moments like that that make being in a band so very special. So thank you…… you were a career highlight!!

Martin Gore remembered about this gig in 2012:

"I remember playing there - not the last tour, I think it was the tour before last - when it was really raining, horrible. And it was like, we felt so bad for the fans, because the doors opened at two o'clock in the afternoon or something, and it was like the worst rain imaginable coming down on them for the whole day. And even when we were on stage, the wind was blowing in at the stage. I think it was one of the only shows on the whole tour where I was on stage in a winter coat." 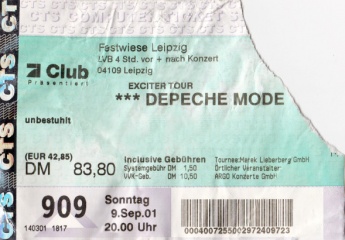