Hollywood Reporter reports on Dave Gahan's acceptance of the Stevie Ray Vaughan Award during the 7th Annual MusiCares MAP Fund Benefit concert in Los Angeles in a May 2011 article. 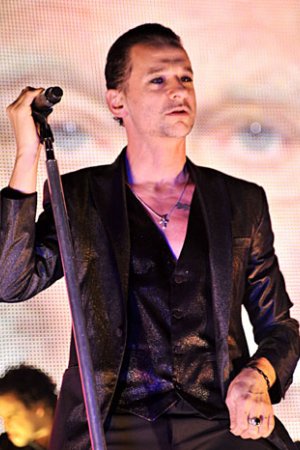 DM Live has more about this subject:
May 6, 2011 MusiCares MAP Fund Benefit concert

The intersection of rock and roll and recovery was the focus of a benefit concert and dinner held at Los Angeles’ Club Nokia on Friday night.

Established in 1989 by The Recording Academy, MusiCares provides emergency aid for music professionals in times of need, often in the form of financial assistance to help with basic living costs and medical expenses. The organization also focuses heavily on addiction and treatment, as evidenced by the event’s dry bar.

Ultimately, it didn’t matter much -- the array of talent was plenty intoxicating, particularly the eight-song closer by Gahan, which included a spot-on cover of Joy Division’s poignant “Love Will Tear Us Apart” (see video), and renditions of David Bowie's "Cracked Actor," Mark Lanegan's "Low," and the Damned's "New Rose," in addition to his band's "Personal Jesus." Jane’s Addiction also provided plenty of punch with the classic “Stop,” one of three songs the band delivered during its mini-set. Other performers included Linkin’ Park’s Chester Bennington, who played acoustic guitar on the moving “The Messenger,” off his band’s latest album, 2010’s A Thousand Suns. Pop-rockers Paramore also opted to go unplugged for their hit “That's What You Get.”

Ozomatli opened the show with a rousing horn and percussion-led rendition of the Depeche Mode 1981 favorite “Just Can’t Get Enough.” The L.A.-based Latin rockers joked that they were among the throngs who rioted in 1990, when some 20,000 fans showed up to Wherehouse Music (then located across from the Beverly Center) for a Depeche signing. They also credited Gahan’s music for getting several band members laid during those formative years.

In speaking of Lyman, Paramore’s Hayley Williams described someone who’s “been like the godfather of our band… and always believed in us. It's why we're here and doing Warped Tour again this year." Also recognizing the career-launching power of Warped was Katy Perry, who cracked about the trek’s “grungy, smelly, raucous” vibe, via video. “I learned a lot,” said Perry. “I still am, but I’m taking more showers… Thanks for taking me, a pop girl, to all the punk rockers. I survived.”

Of course, when it comes to tales of survival, few rock stars have the drug and recovery pedigree of Tyler, a recipient of the Vaughan award in 2005. In introducing Gahan, after spotting longtime MAP supporter Bob Forrest (of Celebrity Rehab fame) in the crowd, Tyler poignantly described a disease that’s taken so many musicians’ lives and livelihood. “At the end of the day, one of the hardest things an addict can do is to get sober and to stay clean,” he said. “It's harder than being a musician, it's harder than being a rock star, it's harder than selling more than 100 million albums worldwide -- all of which Dave has done as well as other unmentionables as Depeche Mode's frontman.”

In accepting the honor, Gahan recounted a moment spent under the influence. “[Steven] accosted me in a bar one night somewhere like Chicago; He wasn't drinking and I was,” Gahan began. “I was tying one on and this guy was sort of annoyingly talking to me. Apparently it was Steven Tyler f--king with my drinking. Anyway, that was a long time ago and I'm blessed to be here.”

"Ya Viene"
"Como Ves" and transition to the cover of "Just Cant Get Enough" by Depeche Mode.

Misery Business
Thats What You Get