Depeche Mode's second promotional gig of the 2013 - 2014 Delta Machine Tour. There are fades between tracks.

You can watch this concert on DepecheModeVEVO's YouTube page. To avoid copyright issues, a torrent of these videos is not offered.

Feathers was the support act. They said:

"We got to see Depeche Mode because we opened for them, which was awesome; it was one of the greatest shows that I’ve ever done. We are huge fans of theirs, but we were mostly excited because it meant we were actually able to see them. It was so hard to get tickets as it was like a lottery, so when we found out we were opening up, we were like ‘yes! we actually get to see them’. It was a really intimate setting — just over 300 people around a really small stage. So, we were just inches away from them when they played. That was amazing."

Actor Owen Wilson and musician Eric Prydz were in attendance. 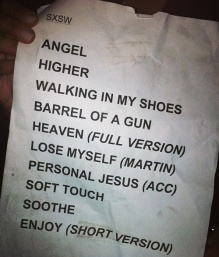 Credit to unknown and bongmute on Home.