Alan Wilder provided at least four demo tracks for Some Great Reward. These tracks are thought by many to be demos by the band Red Flag or I Start Counting (in the latter's case, band member David Baker even claimed two of the demo tracks as his), however, that does not seem to be the case; these demos are almost certainly Alan's.

The second generation tape that contains these tracks. 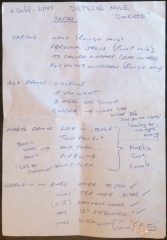 Handritten information sheet detailing contents of the tape that contained these tracks.

Michael Lyons, Andy Fletcher's brother-in-law, affirmed that these tracks are Alan's demos, with PeterToo agreeing, on the Home forum[1] (requires registration to view; quoted below):

Not to be nosey, but could you be a little more specific? This song has been deemed a fake for years and years. A source for the opposite would be nice... ;)

It come from the same cassette tape that 'if you want' was on. This tape was presented to depeche by Alan for the recording of SGR. Only 1 song made it. There were 4 songs if memory serves correctly. They had no titles listed on the inlay card, so the titles that exist today are ones made up by fans many years ago when the tape was found and started to spread. When Alan was asked about 'i feel no guilt' I can understand why he had no recollection of it. My source cannot be revealed I'm sorry. Take it or leave it.

Alan has denied the tracks on an older revision of the Shunt Q&A:[2]

Did you create the tracks 'Violence', 'I Feel No Guilt' and 'Cliche'?

Two questions down from that one, Alan states that the tracks are a maybe and that he doesn't remember them:

Please finally end an argument amongst the fans, did DM have two songs 'Violence' and 'I Feel No Guilt' (circa 1986) that were demo'd but rejected for the LP?

Alan: It's possible but I don't remember these - there have been many demos over the years.

Furthermore, a fan has asked Alan during a webchat whether the 'I Feel No Guilt' demo is fake, and Alan replied that it is indeed a fake.[3] However, "I Feel No Guilt" is not necessarily the true name of the track, as these demos had no titles listed on the inlay card as mentioned in the above quote. All of the track titles are made up by fans except for 'If You Want', since that is the only track from this demo tape that appears in Depeche Mode's catalog, specifically as the penultimate track on the 1984 album Some Great Reward.

It is possible that Alan replied that the track is fake because he is unfamiliar with the track when referred to as "I Feel No Guilt", or he was embarrassed at the track and did not want it attributed to him. He has mentioned disappointment with the tracks he penned for Depeche Mode on his Shunt Q&A site, and also stated that he is indeed singing vocals on the 'If You Want' demo:[4]

Is that you singing the 'If You Want' demo?

Alan: Yes. I sang on the original demo.

If you think 'But Not Tonight' and 'It's Called A Heart' were too pop, what do you think of 'If You Want' and 'Fools'?

Alan: I think they're too poppy as well. I don't like any of my old songs.

On another handwritten information sheet, a total of seven Alan demo tracks are mentioned, but my contact does not have a copy of this tape. DM Live is unaware of any other Alan Wilder demo tracks at this time. A photo of this info sheet is provided to the right.

On 10 September 2015, wiki & forum member Guilmon1998 posted about his meeting with Daniel Miller in which he inquired about these four tracks.[5] Please note that DM Live is somewhat skeptical regarding this recollection; it is up to you whether you decide to believe the information in that thread.

These tracks have all circulated before on various bootleg releases, but in poor quality at best and horrendous quality at worst. The tracks were transferred by the webmaster from a second-generation cassette. There is some slight distortion and hiss present, no doubt stemming from the normal position cassette that was used, but it is easily dismissed. Many, many thanks to a kind collector for generously lending DM Live his tape for archival.

Revision A notes: The tape was transferred again on a serviced and upgraded Nakamichi Dragon cassette deck. No speed correction or automatic phase correction was employed this time. There is also slightly less hiss, tighter bass, and a better soundstage as a result of the better cassette deck used for this transfer.

The lyrics for each song have been transcribed to the best of DM Live’s ability, along with some help from Ronny. They are included in this torrent as lyrics.txt. The lyrics for each track can also be found if you click on their title in the track listing below.

All tracks written by Alan Wilder. Track titles may not reflect the true titles, which are unknown, except for 'If You Want'.