From DM Live - the Depeche Mode live encyclopedia for the masses
< 1982-03-24 Trinity Hall, Hamburg, Germany
Revision as of 17:54, 5 September 2020 by DMLiveWiki (talk | contribs) (Created page with "== Notes == A very good audience recording. Clear, direct, and next to no crowd noise thanks to having been recorded from the mixing desk area. There's some slightly audible...")
(diff) ← Older revision | Latest revision (diff) | Newer revision → (diff)
Jump to navigationJump to search

A very good audience recording. Clear, direct, and next to no crowd noise thanks to having been recorded from the mixing desk area. There's some slightly audible hiss because the tape was recorded at an extremely low level and without Dolby noise reduction. The first performance of Shout was not recorded; the song was restarted due to technical issues, and three-quarters of the restarted Shout are missing. Due to tape degradation requiring a physical tape splice, approximately 2 seconds of What's Your Name? are missing from the second verse of the song, and due to pauses in tape recording, the first few seconds of Photographic, Dreaming Of Me, and I Like It are missing. There are also some strange unexplained dropouts in the second half of Dreaming Of Me.

Technical problems are initially encountered during Shout when the concert began. The song was restarted, but this tape unfortunately only contains the last 30 seconds or so of the restarted song. There were further technical glitches experienced throughout the concert; The Meaning Of Love and Just Can't Get Enough are songs which have quite noticeable technical problems with the synthesizers. Andrew Fletcher said in the November 1982 issue of One Two Testing magazine:

"The [synthesizers] Roland, Moog, PPG, they were all causing trouble. We had to hire another [Moog] Source and Danny [Miller] programmed it in 45 minutes before the gig started. And then when we went on stage there was a big crash and we thought the PPG had blown up. It was the PA - even that had gone wrong."

There was a section of degraded tape approximately one-third through What's Your Name? (see photo below). It seems that the cassette was stopped at this point on the tape before being stored, and long-term contact with the degrading pressure pad also caused the tape to degrade. For proper playback, the pressure pad was replaced, and the tape had to be spliced and repaired at the damaged section, so unfortunately this resulted in approximately 2 seconds of music lost from the second verse, the words "Feeling right". Audio quality suffers for about 10 seconds around the time of the splice.

DJ Jens Lissat recorded this from the mixing desk area using a portable cassette recorder. Unfortunately, this is not a soundboard recording, which is puzzling considering it's likely he would have had access to patch in the recording device to the mixing desk in his capacity as the DJ. DM Live purchased the tape directly from Jens; he played a DJ set following DM's concert, which is also contained on this cassette tape. He initially listed this tape on eBay in January 2018 for an extremely high price, but DM Live was able to contact him and offer him a relatively reasonable price for the tape instead in October 2018. It was initially believed that this was just the master copy of the previously circulating audience recording (Source 1), but it seems that this is a totally uncirculated source which happens to sound similar at first comparison. 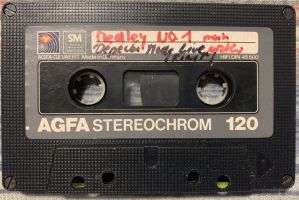