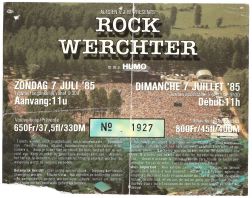 "I think it was the gig - I don't know how many years ago that was - when it turned things around for us in Belgium. I think - all of a sudden - there was a lot of people there of course, there were a lot of people that were maybe the sort of naysayers. And then we put on a really good show, and it seemed that after that, we were able to play Forest-National and stuff like that on our own back. So it'll be fun going back [to Belgium], yeah."

Dave Gahan was asked about this concert again in 2015 by Studio Brussel:

Dave: One of the best memories [about Belgium] is actually playing at Werchter when we were much younger, and we were very low down on the bill. The kind of music we were making and the kind of instrumentation that we used was... people were kind of terrified of it, that it was gonna destroy rock music. At the time, it was really... we were told before the show, "This might not go down well, you might..." So, it kind of... We were always good at taking a challenge. And we went on stage, and there was definitely some of our fans there, a few - couple of thousand - out of the huge 70,000 people that was there. And after a sort of five songs or something, you could feel that we were winning, we were winning over people. You could feel it happening. And that kind of feeling still gives me goosebumps, because, it's why you perform. When you feel that happening, and then once it really turns and happens, and it's like a switch going off, then you're all together. You're like, this energy. Indescribable, really. But that happened that night, and I remember it really well. And I remember when we came off stage, I thought to myself, "Well, we just broke into Belgium. That's it. Now people know who we are."

Q: Was it one of the key moments for you in Belgium or in your career?

Dave: Absolutely. I think in career, too, because it was a huge stage. We was walking on stage, it took guts to go on stage in front of an audience that was skeptical about what you were gonna do.