"I can't work in England anymore. It's funny. [Hansa studio] is right next to the Berlin Wall but none of us has ever been to the East. Martin tried once but they refused him entry. Didn't like the way he was dressed. Thought he was a hooligan. People imagine we work here because it's wow, you know, really heavy, but I don't feel that. The place is quite suburban. Berlin's like Brixton. [...] Oh, yeah. [The cellar] is a bit weird, innit? I was down here doing the vocals for ‘Shake The Disease’ in the dark, last time we were here, and I was terrified. I had all noises in me headphones like whispers, and apparently sometimes you can see the shadow of a projectionist. It's a bit haunted, this studio."[1]

"The song tells the story of a one-sided relationship between a girl and a boy. They realize that it is as good as over for them. So it's a poignant song, but not real life. Christine [Friedrich, girlfriend] and I are still doing very well. A breakup is definitely out of the question."

"Sometimes [the links between songs] are very obvious, there are things like references cos I really like references to other songs. In 'Shake The Disease' there’s a reference to another song. You know it says, Now I've got things to do // and I've said before that I know you have too. And in another song [Stories Of Old] it said, Now I've got things to do // you have too. I really like those kind of references."

"It's basically a love song, and it's really about the problems of not being able to get across what you really mean, in love, when you're actually trying to talk to someone that you, let's say, fancy, you know, you fancy someone at school or whatever and you're trying to talk to them. Sometimes it's very difficult, you know, and that's what it's basically about. And he's trying to shake that disease of not being able to talk to people."

Andrew Fletcher in the July 1985 issue of Popcorn magazine (translated from German):

"We are all in happy relationships, and this song is our thank you to our women, who must not have always had it easy with us. The text deals with the problem of how difficult is to keep a relationship in our situation, because we are so often separated. But we can't write it without a shot of egoism, in our opinion. It is important that you openly state the things that bother you - and that's what 'Shake The Disease' is mostly about." 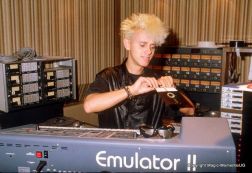 1985 photograph of Martin Gore with the EMU Emulator II sampler keyboard during the recording of 'Shake The Disease'. Photo by eBay seller magicmomentsug4u, retrieved via Facebook group “Depeche Mode Classic Photos And Videos”.

"With 'Shake The Disease', we should finally succeed in the States. Our past dance tracks have all hopelessly disappeared. So we thought it was a good idea to attack the U.S. market with this slow, delicate track."

When Depeche Mode was interviewed about the songs on the '101' CD for the April 1989 issue of French magazine 'Best', Fletcher said (translated from French):

"It's one of the songs we've been playing for a long time. Every time I hear it, it reminds me of the music video. I cannot forget the music video. I had to stand on some kind of machine and allow it to drop me to my side. I had no confidence in this device that was supposed to hold me back in my drop. I thought I'd die that day."

Dave Gahan, Alan Wilder, and Andrew Fletcher discussed Shake The Disease in an October 1985 interview with British magazine No. 1:

Dave Gahan: "Another one of those tracks which I think is a great song where we didn't really give it enough in the studio. We were touring and trying to make a record at the same time. It was the first single where we had nothing to do with the mixing."
Andrew Fletcher: "When we came back from America there were loads of things we didn't like about it."
Gahan: "It was crying for a great big chorus but it didn't happen."
Alan Wilder: "It is a great song. [Should] have been a very big hit. It did very well elsewhere."
Wilder: "It was the sort of song you needed to hear a few times."[2]

I'm not going down on my knees

Begging you to adore me

Can't you see it's misery

And torture for me

Try as hard as you can

I've tried as hard as I could

To make you see

How important it is for me

Here is a plea

From my heart to you

As well as you do

You know how hard it is for me

To shake the disease

That takes hold of my tongue

Some people have to be

To each other forever

Now I've got things to do

And I've said before

That I know you have too

When I'm not there

In spirit I'll be there

Here is a plea

From my heart to you

As well as you do

You know how hard it is for me

To shake the disease

That takes hold of my tongue

There are a couple faithfully performed instrumental covers of this demo version. See the entry on the fake and misattributed tracks subpage.

This section provides an example of a live version of Shake The Disease from each tour that it was played.