On September 20, 2021, 45-second excerpts of demos of 12 songs and studio outtake / rough versions of 2 songs from the 2013 album Delta Machine were uploaded to SoundCloud, but were removed within a few hours.[1] The link to the SoundCloud playlist was posted on the Home fan forum[2]; see screenshot to the right. Those excerpts were downloaded and are mirrored below.

Screenshot of Home forum post (no longer accessible) linking to SoundCloud playlist of these excerpts.

Facebook member Jonas Öberg posted a photo about these demos on May 14, 2021[3], indicating that he has had the demos for at least 5 years since the time of the post, and showing the same 14 songs along with Goodbye, which did not have a snippet uploaded to SoundCloud. According to Winamp seen in the photograph, Slow is 1411kbps 44.1khz, which is 16-bit 44.1khz PCM audio, which suggests he has lossless copies of the files. 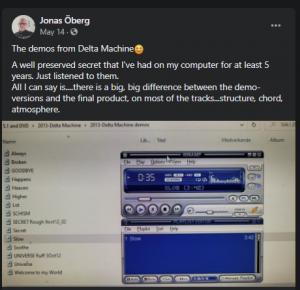 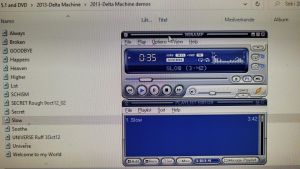 Dave vocals. This song has both a 45-second excerpt and a 2 minute, 46-second excerpt which was also uploaded then removed by the SoundCloud user "DMfanTrade" in August 2021; file captured by and provided courtesy of zzed101.