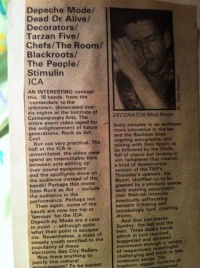 "[B]y the time of their gig at London's ICA on 26 August they had introduced their new professional 'reel to reel' tape player which on that occasion led to some teething troubles."

The Institute of Contemporary Arts showcased 18 bands over six nights. DM played on the second night, with The Chefs and Tarzan 5 as the support acts.

This concert had a three track FM broadcast consisting of the tracks Boys Say Go!, The Price Of Love, and Dreaming Of Me. The entire concert, along with the other bands performing over the six nights, was reportedly video taped, according to a newspaper review of the concert; see right. To date, the video of Depeche Mode's performance is not available.

You can download a lossless version of this FM broadcast below.

On December 12, 2016, DMLiveWiki emailed the ICA inquiring whether they have the video of the concert mentioned in the newspaper review, or any audio that could have been used for the Capital Radio FM broadcast. They replied quite thoroughly and promptly the next day, and unfortunately the ICA believes any video footage or audio recording no longer exists; see below.

Many thanks for your query regarding a Depeche Mode performance at the ICA in 1981.

The ICA’s archive material pre-1987 was purchased by Tate in the mid-1990s and is now available via the Tate Archive, based at Tate Britain. The online catalogue for the archive is accessible here:

Tate haven’t comprehensively catalogued the A/V elements of the archive yet (audio cassettes, video cassettes and photographs) but I do have box lists they have produced and I can find no references at all to Depeche Mode in the audio or video recordings. Therefore I have to assume, with regret, that this no longer exists.

We do occasionally receive new archive material from former staff or freelancers who worked on or with the ICA, and if any material relating to Depeche Mode comes to light I’ll contact you to make you aware.

Thanks again for your query, and apologies for the disappointing reply.