From DM Live - the Depeche Mode live encyclopedia for the masses
< 1981-08-26 Institute of Contemporary Arts, London, England, UK
Jump to navigationJump to search

A very good quality FM broadcast recording of three tracks. Bass can be a little boomy and overpowering, and the high frequencies extend out to about 13khz, but as this was recorded on a portable radio, this is not unexpected.

2020 revision for the concert's 39th anniversary: transfer once more on a superior deck, yielding better sound quality and correct speed.

The original copy of this recording was a MiniDisc copy of this cassette that sounded considerably worse than this transfer from the original master cassette. This audio is significantly clearer overall, with the second and third tracks no longer having an unusual "pumping" effect nearly as audible as with the old transfer, and there are no fades or cuts that do not appear on the original tape. A million thanks to the original taper John for taking the time and effort to locate his master tape and ship it to me! The resulting upgrade in sound quality speaks for itself.

This FM broadcast provides another soundboard-quality source for the tracks The Price Of Love and Dreaming Of Me. The only other current source for The Price Of Love in such quality is the soundboard recording from 1981-06-27 Crocs, Rayleigh, Essex, England, UK. Boys Say Go! has several soundboard and FM sources available (see Boys Say Go / 1981 Tour). Dreaming Of Me has a somewhat different arrangement and sound, more closely resembling the single version compared to the version played at Crocs.

Note that this concert was reported by a local newspaper's review to have been video taped. DM Live has contacted the Institute of Contemporary Arts to inquire whether the supposed video recording or any sort of audio recording exists in their archives, but the response was that the material no longer exists. Read the newspaper review and ICA's response at the main page for this concert. 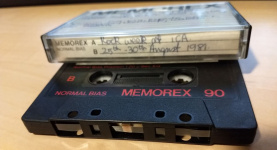