From DM Live - the Depeche Mode live encyclopedia for the masses
< 1982-02-16 University, Exeter, England, UK
Jump to navigationJump to search

This is a significantly better sounding source than the previously available one. It does have fairly loud hiss, but so did the previous source. It also has a couple flaws: the quality degrades somewhat for the left channel of Boys Say Go!, Puppets, and the beginning of See You. I've amplified the left channel of Puppets since the issue was very noticeable with that track. This recording played quite fast, but I believe the speed is very close to being accurate now after speed correction. Note that the previous source included "I Like It" as the final track; this new tape copy does not have it on the tape. I've determined that "I Like It" on the previous source is actually the performance of that track from 1982-03-26 Berlin. I am not sure whether "I Like It" was played during this concert.

Many thanks to Markus for providing this tape. 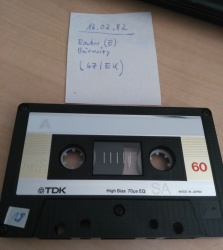