Martin says about this gig the next day in this interview: "Well, last night, Dave reckons, was the hottest concert we ever played."

In '101', Theresa Conroy can be heard saying that this concert was sold out.

Chris Hegedus and Dave Gahan say in the BBC documentary about 101:

Chris Hegedus: I was very struck, as we went around the country, at the differences of the audiences as we went along in the South. I was really surprised at how stylish those people were.

Dave Gahan: Yeah. They're all very incredibly good looking, and-

Dave Gahan: -Yeah, but very middle class, sort of wealthy, very wealthy. You could tell that it's "people are people" and they're all coming into the concert. That was probably somewhere like Dallas, or Houston-

Orchestral Manoeuvres in the Dark was the support act. 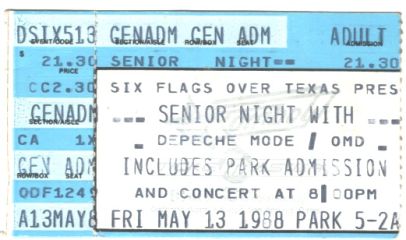