Just like the previous concert at 1993-07-22 Sporthalle, Cologne, Germany, Dave sounded particularly bad during this night and the encore was cut short; the concert ended with Enjoy The Silence. It was reported by fans that there was a lot of rain and thunder during the gig, and towards the end of the gig, the tide had turned, leaving some audience members standing there with ocean water coming up to their knees. There were also some technical problems, like a speaker malfunctioning halfway during the gig. Dave Gahan is reported as having said "Whose plan was it to play at the fucking beach anyway?"

July 23rd, OSTEND: Martin Gore’s birthday today, and guess what? We had a day off in OSTEND. A day-off-in-Ostend… I once wrote a script for a soap opera set in a pub in OSTEND. It was called “OSTENDERS”. It could have worked, but Anita Dobson sounded ridiculous with a Flemish accent. A day off in Ostend should have been as bad as it sounds, but we had a hotel on the beach, and looking across the North Sea you could almost smell the fish and chips. Three months away from Blighty; and now so close to home. We’ve got a gig in ZEEBRUGGE tomorrow and then a 2000 mile journey across the whole of Europe for a show in BUDAPEST. So near and yet so far…

July 24th, ZEEBRUGGE: Headlined the huge Belga Beach festival today. The festival IS actually on the beach but Belga isn’t a coastal suburb of ZEEBRUGGE, it’s actually a brand of horrible cigarettes. The band were excellent tonight, even though the man upstairs decided to turn the shower on. The crowd stayed in good spirits all the same, and to show solidarity, Dave went right to the front of the stage, and dancing in bare feet, got absolutely soaked. He seemed to have an aversion to anything metal for some reason. We had a huge power-cut backstage tonight (about the same time Dave plugged his hairdryer in…). 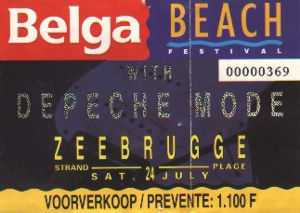