A good, maybe even a very good audience recording. There's some slight distortion and boominess, mostly in the right channel, and there isn't a whole lot of dynamic range, but otherwise it's a fairly clear sounding recording with little audience noise during the songs. The first half of the concert was not recorded since the tape recorder was mistakenly and unknowingly recording on part of the A-side prior to the concert. Rush is missing the first few seconds due to tape flip. Unfortunately, at 1:06 into Rush, there is a 10 second segment of drop outs and garbled sound due to a section of tape that became crinkled in my tape deck - 120 minute tape is very, very thin and sensitive compared to shorter tape lengths, so it does not come as too much of a surprise. A patched version of the track using the available 256kbps MP3 version of this recording is available in the "Patched Rush" folder, if you choose to use it. The main torrent has the unpatched version. The final 20 minutes of the B-side is all audience noise, but I left it out due to the fact that commercial music is played and it's really just a waste of space.

Many thanks to Frank for taping the concert, keeping his cassette all these years, providing photos of his backstage pass & ticket stub, and quite generously shipping the tape to me to transfer, share, and keep. This recording previously circulated as a 256kbps MP3 copy (at least, that is the only copy I ever found), which played a bit too slow and much too quietly, had fades, missing encore audience noise, and was missing Everything Counts entirely.

I must reiterate: if you taped any concert of Depeche Mode, even with low-end equipment like Frank used, please consider lending me your tape to transfer! This tape actually sounds quite good considering all of the circumstances, and even though it's incomplete, it's still a nice memento of the concert, and a basically uncirculated one to boot. If you compare this transfer to the previous 256kbps MP3 version, there is simply no contest. 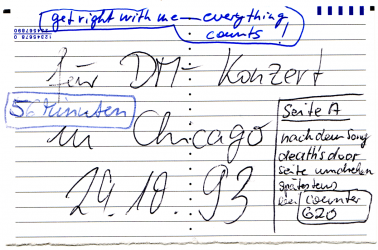