A recording of this gig appears on a bootleg CD called 'Live In Dave Gahan's Pants'. Towards the end of Everything Counts, a guy is going mad while singing along to the song, and Dave comments "Thank you. Keep taking the drugs."

I have a special affection for this gig. I remember Dave coming round my council flat in Basildon in early 1985 and being very excited because The Hollywood Palladium had sold out in minutes and the promoter had added another show – “Somewhere near Orange County, holds over 12,000 people!” and that’s when it started getting mental. We celebrated with four cans of Fosters and sat down to enjoy another gripping episode of “The Bill” – Ahh, the good old days…

Stabbing Westward and Primal Scream were the support acts. 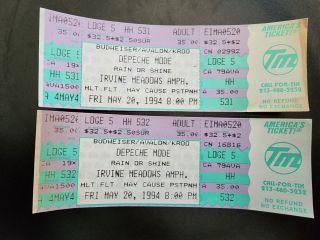