As part of his 2011 auction, Alan Wilder sold 20 numbered and signed ZIP discs for the Emax II sampler containing samples used during the 1987-1988 Music For The Masses Tour and 1993 Devotional Tour[1]. Most of the samples were taken from the original multitrack recordings.[1] Samples of songs from the Devotional tour that went unplayed or played only once (in the case of Something To Do) were also included in the auction.[1]

Please note that for obvious reasons, the samples can not be made available here. It would seem they circulate fairly widely nonetheless, to the point that there's a post about it on reddit.[2]

It would seem that the ZIP discs sold were not necessarily complete sets, as more samples than these from the respective tours circulate more tightly. One notable case is Never Turn Your Back On Mother Earth; this track was present on one of Alan Wilder's Emax II ZIP discs, as told to me directly from an anonymous source who worked with Alan during his 2011 auction. The quality is somewhat degraded due to age of the ZIP discs[1] and lossy audio compression used for this track. The pops and clicks in the middle section specifically are the most obvious audible result of the degradation due to age. ZIP discs are notorious for their poor reliability, so this situation certainly makes sense. This track was previously thought to be a well-made fan cover, but I believe it is a legitimate sequence that was used during the tour. This information also appears on the 1987 - 1988 Music For The Masses Tour Backing Tapes page.

Furthermore, the Soundcloud user Michigan-Sweden recreated very faithful sounding "live instrumentals" of many tracks from the MFTM tour and other tours using some of the original samples from Alan Wilder's Emax II setup. Listen to them on his Soundcloud here.

The Zip discs will work in any suitable Zip drive and connect to the Emax via a scuzi cable. Despite our best efforts, we were unable to transfer everything absolutely perfectly from the original floppies. The vast majority of sounds are fully in tact but one or two have small corruptions at the end of notes. The good news is that, with a bit of careful editing, these glitches can be removed. (Thanks goes to Tom & Simon for their help)

“I spent many hours (days!) programming each member’s keyboards for the tours, painstakingly trying to recreate as accurately as possible the sounds we formulated and used on the records. The Emax was a perfect tool for the live re-creations. This collection covers most of my own sounds for the two tours, although I did play live drums on some songs. I tried all these out recently and discovered how much fun it is to work out the various parts we all used to play. I even found some guide sounds which weren’t actually performed live but were used to demonstrate parts to others. For example, I discovered some guide vocals for Condemnation which were sampled to help routine our girl backing vocalists during the rehearsals.” 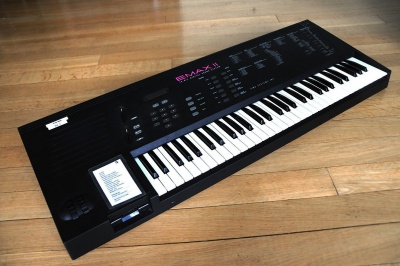