On September 28, 2016, a news article appeared on West Briton (now Cornwall Live)[1] regarding Robin Neale, a hairdresser from Truro, Cornwall, UK, having unearthed two reel-to-reel tapes containing a demo tape and a live recording of Depeche Mode. In my opinion, unless proven otherwise by Robin or Russell (Robin's brother) that the tapes are legitimate, this is simply a ruse to promote the brothers' hair studio. An analysis of the claims is below. 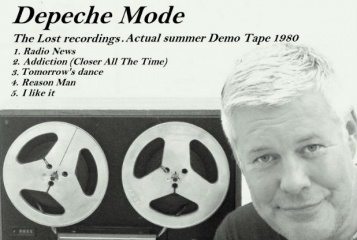 The first tape described is said to be the "Actual summer Demo Tape 1980", with the following tracklist:

All tracks are early live-only songs, and all except Radio News have live recordings in circulation already, while Radio News has the demo recording available:

According to the news article, the tape also contains Ice Machine, Radio News, and Photographic from the Summer 1980 Demo Tape.[1]

Only two demo tapes from 1980 are currently known: Vince Clarke's "Composition Of Sound" 4-track demo tape, consisting of Television Set, Photographic, an unknown instrumental, and an unknown song; and the Summer 1980 Demo Tape (described immediately above). It's certainly possible that the first four tracks do consist of another demo tape that the band attempted to show to labels, but the purported demo for I Like It is most likely simply a live recording of the song, likely from the FM radio broadcast of 1982-02-21 Tiffany's, Glasgow, Scotland, UK as that is currently the best quality recording of the song.

Another possibility is that, for both tapes, Robin received a compilation tape of sorts, comprising many of these early tracks, but that would be entirely contradictory to Robin's quote from the article:[1]

This purported demo tape cannot be proven real or fake at this time without hearing it or having confirmation from a trusted source that the first four tracks really did comprise a demo tape that the band made, but as I am fairly confident that the live recording is a fake (read the analysis of the live tape below), the credibility of this demo tape is not strong.

The other tape is said to be a live recording from one of Depeche Mode's concerts at Crocs Nightclub in Rayleigh, some time in 1980. According to the article:[1]

As well as featuring a very basic version of later hit Just Can't Get Enough, the set includes early live songs such as Addiction, Tomorrow's Dance, Reason Man, Television Set and even a cover version of Gerry And The Pacemakers' I Like It.

To the best of our knowledge, Just Can't Get Enough was not played live until November 1980, corroborated with a live recording from 1980-11-14 Technical College, Southend-On-Sea, Essex, England, UK, which is likely to have also been the first live performance of the song. As mentioned above in the demo tape section, I Like It was never performed live until the 1982 "See You" Tour. The other live tracks already have recordings available. The majority of the Crocs concerts during the 1980 Tour occurred earlier than the earliest concert with a recording, 1980-10-30 Bridge House, London, England, UK, and inferring from the known setlist of 1980-09-20 Crocs, Rayleigh, Essex, England, UK, other yet-unheard live-only songs seem more likely to have been performed at such a Crocs concert, rather than the early live-only songs that we have already heard.

For reference, Depeche Mode performed at Crocs at the following dates in 1980:

Found in Martin's scrap book as seen in the "Making The Universe" short documentary.

While it is true that the 1980-09-20 Crocs, Rayleigh, Essex, England, UK concert had three out of six mentioned tracks performed, Addiction, Just Can't Get Enough, and especially I Like It are too significant of outliers to qualify 1980-09-20 Crocs as a potential candidate for what's on Robin's tape, as the first two were not performed until November 1980 and I Like It not until February 1982.

However, since Tomorrow's Dance and Reason Man seem to have been dropped from the usual set list by 1980-11-14 Technical College, Southend-On-Sea, Essex, England, UK, the probability of those tracks having been performed at a single concert along with Addiction seems slim, especially when the band was already playing tracks which were quite popular with fans of the time such as Ice Machine and Tora! Tora! Tora! which would be a better decision to play instead of the earlier tracks. There is an extremely slim chance that this recording is from November 1980, and since Addiction is said to have been played on Robin's recording, there is no chance of this being an earlier Crocs concert either!

The fact that the recordings are on reel-to-reel is also somewhat unusual. Demo tapes were typically distributed on cassette due to easy portability and ease of playback by the labels. The live recording could have been recorded on reel by the Crocs sound engineer; Depeche Mode's later performance at 1981-06-27 Crocs, Rayleigh, Essex, England, UK was recorded from the mixing desk, but the recording memorandum is not specific as to whether the original source was a reel-to-reel tape or cassette tape (see right).

Robin Neale was quoted in the article:[1]

"My brother Russell and I were, and still are, friends of Depeche Mode. Not only that but in 1980 we were apprentice hairdressers and used to do the band's hair in the toilets of Crocs. Not very glamorous compared with the dressing rooms at Madison Square Gardens and arenas where they play now.

"I was invited to the after-show party at the 02 Arena concert in 2014 but declined as I was exhausted and had to get back to my hotel which was the other side of London . I somewhat regret it now."

Andrew Fletcher was asked about this in a Russian interview with colta.ru on November 28, 2016.[2] A Google translated version of the relevant information is below:

Interviewer: A few weeks ago I came across an amusing story about a man who was a barber and the group found in the attic entry with one of the first performances of Depeche Mode.

Fletch: Yes, I read about it. Frankly, I do not remember this guy. And this record, I did not hear. Until I hear - I can not say whether it's true or duck.

Interviewer: But it could be true?

Fletch: Yes. Fans were recording our shows since the very first years of the group. I think that a lot of records.

While this doesn't disprove Robin's claim of the tapes, the fact that Fletch doesn't remember Robin is troubling, moreso since Robin was supposedly invited to an after-show party presumably by somebody from the band or management. It stands to reason that Fletch likely brought up this article to Martin and Dave, so if one of them remembered Robin or Russell, then Fletch would've said so at the time he was being interviewed.

I attempted to contact Robin Neale via a polite Facebook message to obtain more information about these tapes several days before the article on Cornwall Live appeared, as he had posted some photos of the reels as well as the demo tape image at the top of the page to his Facebook wall. I received no response to date. I then attempted once more after the article had emerged, on September 29, 2016, and also had a mutual Facebook friend attempt to message him to ensure that Robin would receive a notification; again, no response. I also tried messaging Russell Neale, Robin's brother, to no avail.

I had a colleague from the UK phone the hair studio, and he was met with only a busy signal. The email address listed on the hair studio's Facebook page is defunct.

Robin was quoted in the article:[1]

"For myself and Russell it's just a bit of history but we are prepared to duplicate for any hardcore devotees."

It seems, thus far, that he is indeed not prepared to share the recordings, despite the fact that they are said in the article to have been transferred to CD:[1]

The tapes discovered by Robin, which he has now transferred to CD and says have excellent sound quality, were recorded a few months later at Crocs nightclub in Raleigh, Essex.