An excellent sounding, crystal clear FM broadcast recording sourced from a master cassette. This is the most complete version of this FM broadcast available, with no music missing whatsoever (after a few small patches using a pre-FM source). DRS3 recorded this concert and licensed this recording to Westwood One, and all available variants of the FM broadcast are derived from the DRS3 broadcast. There are occasional whispered "DRS3" watermarks throughout the recording, as well as three louder spoken "DRS3" watermarks which do not interfere with the music. Audience noise between Everything Counts and See You is crossfaded by the radio station with a spoken "DRS3" watermark in between. Bass is very slightly distorted at times depending on the song due to cassette tape oversaturation, but it does not detract significantly from enjoyment of this recording; the only tracks I noticed the distorted bass are People Are People and Lie To Me. Despite the patching of several flaws present on this FM master tape using a pre-FM source, some flaws are originally present on the DRS3 master tape recording used by all sources, and have been kept unmodified instead of attempting to patch them using other parts of the recording.

About five seconds of Told You So are missing due to tape flip, and about eleven seconds of the music on the tape on either side of the tape flip was unusable due to fades. Fage patched about twelve seconds of the track using a flawless Exact Audio Copy rip of the Westwood One pre-FM CD "In The Zone - Depeche Mode 1984" SHOW #97-19[1], with audio slightly modified to match the tape source's sound better for a more seamless patch, including pitch correction and swapping of stereo channels. If you'd prefer an unpatched version, it's in the bonus folder in this archive.

It seems that the original recording done by DRS3 is missing around thirty seconds between Shame and Somebody. All available sources, including the Westwood One pre-FM sets, have the same flaw. The recording cuts right after the "thank you" said by Dave after the end of Shame. The next twelve seconds of audience noise are taken from the end of Just Can't Get Enough (around 5:19). The intro ambiance (twelve seconds) of Somebody is missing in full on all Basel variants. The fake audience noise is removed from the main folder's version, so Somebody begins immediately after Dave's "thank you" at the end of Shame. In the bonus folder, you will find a completed version of Shame with the intro ambiance of Somebody added to the end from the FM broadcast of 1984-11-02 London, as well as the unpatched "raw" version (including a "DRS3" spoken jingle).

An interesting fact: the pre-show audience noise has not appeared in unedited form on any prior version of the Basel recording, not even on Westwood One's pre-FM CD/CD-R releases because fake crowd noise was inserted everywhere on those variants instead of the real audience noise. On this recording, you can hear someone, probably Dave, making a small grunt about thirty-seven seconds in. For an unknown reason, the CD and LP versions of the "Performance"[2] removed the whole intro of the concert, despite the fact that there was enough time on the medium to include it. All other bootleg releases of the FM broadcast are missing the pre-show audience noise as well.

It was said to me by subwave that "The Swingin' Pig" bootleg label, who released "Performance"[2], used at least some portion of this master tape; what specifically was used is unknown, but if this tape was used in its entirety, the label used an alternate source to complete the missing music in Told You So.

The audio mix of this FM broadcast is a bit strange; certain elements are extremely far down in the mix, to the point of being nearly inaudible. Martin and Alan singing together during the chorus of "Everything Counts" is quite dissonant; this is likely a mixing oversight as other releases such as the London '84 BBC pre-FM vinyl and especially "The World We Live In And Live In Hamburg" sound quite pleasant. The mix differs greatly to the several officially released tracks from this concert; the official tracks are quite reverberated and seem to emphasize keyboards, plus some sounds clearly audible on the officially released tracks are not audible whatsoever on any DRS3-derived recording. For example, during the instrumental bridge of If You Want, the choir vocal pad at the end of each bar is heard on the official release, but not on the FM broadcast, et al. Additionally, Alan's vocals during If You Want are also quite buried in the mix; it is difficult to hear his vocals, which is unfortunate because the song is a duet with Dave and Alan both singing the entire song.

I confirmed that DRS3 broadcasted the Westwood One pre-FM source by verifying that the same sound flaws are present on both the Westwood One pre-FM CD source and this FM master tape. I also checked all other sources and bootleg releases that include Basel 1984 tracks, and all are derived from the DRS3 FM broadcast, or at least were able to be verified as Westwood One pre-FM sourced in case no DRS3 watermarks were heard. The taper, subwave, says that this tape was likely broadcast a few days or weeks after the concert occurred. It is not known whether the concert was broadcasted live, but it is doubtful because of the missing intro ambiance of "Somebody", which was most likely when DRS3 changed tapes. The exact date of the DRS3 broadcast is unknown; if someone knows a concrete answer, please don't hesitate to contact me.

Do note that there is a complete, unedited pre-FM recording from this concert available at Source 1.

Detailed information about bootleg variants and commercial, non-official releases containing tracks from Basel is provided at the Bootleg and commercial variants subpage for this date.

Many, many thanks to subwave for generously providing his tape for me to transfer and share. Also, immense thanks to Vince and Fage for their help in reworking this recording for the best possible listening experience. 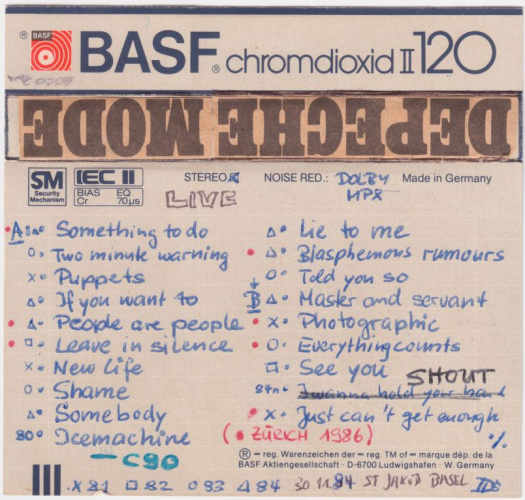