From DM Live - the Depeche Mode live encyclopedia for the masses
< 1986-04-10 N.E.C., Birmingham, England, UK
Jump to navigationJump to search

A very good sounding FM broadcast. This seems to be the alternate version of the broadcast which included Shake The Disease. This tape is labelled as a first-generation copy. Despite the low generation, there's some distortion, volume inconsistencies, and a moderate amount of hiss for some tracks. Regardless, this is still a quite good recording, and contains the best, cleanest sounding copy of Shake The Disease from this broadcast that I've heard.

Some tracks have small cuts or fades at the beginning, but this seems to be how the audio was broadcast as Source 1 has the same small flaws. The beginning of Something To Do is odd - the typical noise at the beginning fades in, then there's a half-second gap before the song actually starts. It almost sounds like someone spliced that noise in from the album version; Source 1 doesn't have that noise, neither do most versions of the officially released track; only the version on the X2 box set does, along with different mastering from the version on the single releases.

Many thanks to Markus for providing this tape. 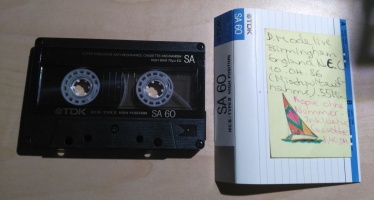