From DM Live - the Depeche Mode live encyclopedia for the masses
< 1986-05-20 Münsterlandhalle, Münster, Germany
Jump to navigationJump to search

A very good audience recording. The first few seconds of Christmas Island are missing, the first several seconds of A Question Of Lust are missing due to tape flip and about 20 seconds toward the end of the song are also missing for some reason. This is better sounding than fallenqueen's transfer of his low-generation copy; there is less noise, better defined bass, and there is no high pitched noise on the second half of the tape. There are also about two minutes more of audience noise retained on this tape. Leave In Silence is rather distorted during the beginning and a couple other parts later in the song - it would seem that the bass overpowered Elly's recording equipment. There is similar distortion for some other tracks, but it is not too detracting from the quality of the tape.

Many thanks to Falko for generously lending me a batch of five low-gen cassettes of Elly's recordings from the Black Celebration tour to transfer. 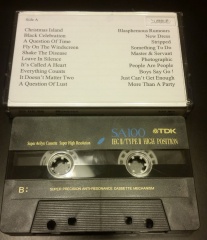