The backing tapes for the 1990 World Violation Tour have been circulating in poor quality on unknown generation audio cassette since the early 90s. DM Live had the opportunity to transfer a very good sounding second-generation stereo cassette copy of the backing tapes, of which two minute excerpts of each track are provided below for your listening enjoyment. Many thanks to a kind collector for his generously lending his tapes to transfer. 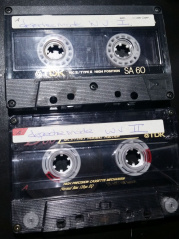 The second-generation cassette tapes this audio is sourced from.

Some info regarding what is audible on the backing tapes and how they came to circulate fairly publicly is at Shunt Q&A - LIVE - live albums / versions / performance:

On the 'World Violation' backing tapes, one can hear drums on 'Clean' and a guitar on 'Personal Jesus' mixed very low. Were they there for back-up or to flesh out the live sound or have I been imagining things?

Alan: The extra sounds you heard were never audible through the P.A. system. They were back-up sounds in case of breakdown.

You've answered questions regarding the 'World Violation' tour backing tapes before but what has always puzzled me was how / why they made available to the public. I know they weren't officially released, so how were they 'leaked' to whoever distributes them? Even *I* have a copy! ;-)

Alan: I have absolutely no idea. It is usually necessary for a few cassettes or Dats of the backing tapes to be made for various people to listen to (same applies to demos etc.). These inevitably get left lying around before falling into the wrong hands.

Backup sounds (such as those mentioned in Peter’s question above) would not generally be audible through the PA system during a live concert except in the event of equipment failure. These sounds are audible on cassette-sourced copies of the backing tapes as their contents are of the full stereo multi-track mix-down without any tracks being muted as they would have been during a live concert.

Excellent sounding snippets have previously been shared online, but these have been created using the available partial multitracks of the songs (from the Rock Band or Guitar Hero video games) and are not genuine backing tracks. These snippets are available to listen to at the bottom of this page for comparison purposes.

The full backing tapes are not made available on this wiki in order to help avoid potential issues resulting from the fact that the audio is derived from studio content.

Basic handwritten track listing bundled with the above tapes.

Basic handwritten track listing bundled with the above tapes, back side.