Andy Fletcher said this about this concert and/or the previous concert:

"To go back on stage and really perform, like we're doing right at the moment, is a real joy. I was watching during our show in Berlin, and Dave was singing fantastically, the audience was going crazy, and I was just staring at it all - and I ended up forgetting what I was playing. It was spectacular, and the crowd response was unreal. It's just been great fun."

Here is the diary entry by Jez Webb from Bong magazine issue #40:

This venue is an outdoor amphitheatre built to accommodate around 12,000 fanatics of a certain Mr. Hitler. That’s the Nazi dictator, not the lesser known trombone player who was around the same time and whose career was blighted by his namesake (difficult getting bookings for a world tour). We played here on the last tour. It rained throughout the gig and the stage had to be mopped after each song. We gave the good Lord a two day opportunity to drench us this time, thankfully he didn’t pick up on the option. It’s an impressive sight looking out from stage on a wall of people as they rise up away from you. “Never Let Me Down Again” had the obligatory arm waving, which got a few of us crew grabbing for our cameras.

And here is the diary entry by Jody]:

DM performed two shows back to back in Waldbuhne, a fantastic venue in Berlin. The shows were incredible, and there are some pictures to prove it. Sold out over the two nights with 21,000 people each night. We then traveled to Erfurt on Sunday for another show, which again was great and here are even more pictures to prove it.

After a day off (for most) in Berlin we are flying to Brussels tomorrow and then back to Germany for a gig in Stuttgart.

Purity was the support act. Tim Simenon DJed before and after Purity's set. 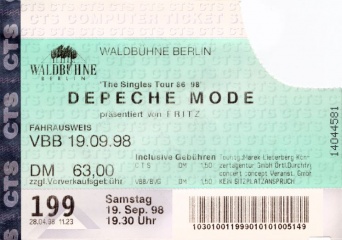