A thunderous east coast storm challenged us until show time. We seem to bring the gloomiest of climates everywhere we travel! As Fletch often says, "It wouldn't be a proper Depeche Mode gig without a little bit of rain."

After a bumpy ride to Providence, Rhode Island, we drove through the lush bay town and made our way into Mansfield, Massachusetts. Interesting fact: Mansfield's twin city is Nottinghamshire, England. The more you know.

Despite the weather and travel delay, we arrived in time for another great meet and greet with some lucky competition winners. With less that 1 hour and a half until stage time, we had to get ready pretty quickly - sadly, no usual game of foosball or cards before the gig.

The Boston crowd seemed in high spirits as well! Check out some photos from another excellent show at the Comcast Center.

According to a 2008 tour list uploaded by PeterToo, this concert was initially planned to take place on 2009-09-02. 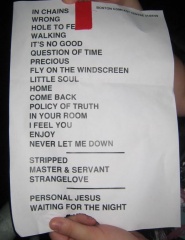