After a much-need 3-week break, we all met up once again in Guadalajara, Mexico. The night before our gig at the Arena V.F.G., we took in some sights and grabbed dinner at a lovely local restaurant in the city. After stuffing ourselves with tostadas, enchiladas, guacamole and quesadillas, we agreed that there wasn't a better way to kick of our Latin American tour!

The experience in Mexico has been warm and inviting; a culture comprised of hospitable and friendly people and some die-hard Mode fans - and 14,000 of them showed up tonight to see DM take the stage for the first time in Guadalajara. SOLD OUT.

Check out the photos for some behind-the-scenes captures and live shots.

See you in Mexico City!

According to a 2008 tour list uploaded by PeterToo, this concert was initially planned to take place on 2009-10-07. 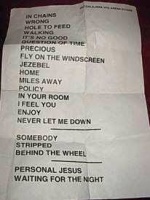