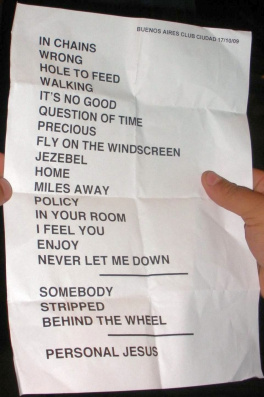 Our last gig of the Latin American tour. I had been waiting anxiously to get to Buenos Aires. Well, I should point out that many of our Latin American stops were foreign and new to a number of people on the tour - including myself. San Diego is about as far south of Los Angeles (my hometown) as I've been. Making Mexico a Spring Break destination when in college was never a big interest of mine. I'm glad that I waited patiently because my experiences in Mexico with Depeche Mode - as well as Central and South America - have made for some incredibly fond memories.

With that said, however, Buenos Aires was a home away from home. I felt familiar with the city despite never having been. And the crowd at Club Ciudad? 32,000 devotees showed us some real Latin love - no better way to end another successful leg.

Check out the photos and live vicariously...

See you in Europe!

According to a 2008 tour list uploaded by PeterToo, this concert was initially planned to take place on 2009-10-18.