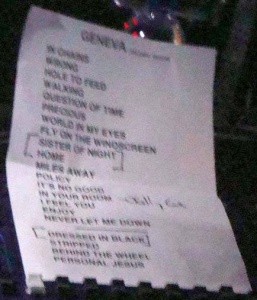 When landing at Geneva airport the first thing you see is the Palexpo - very visible from the air, and situated right next to the airport.

The Depeche Mode show took place in Halle 6 (1 - 5 being slightly smaller). Halle 6 was on first impression a huge cold aircraft hangar - or as guitar tech Jez Webb called it "a bit of an old barn" - and hardly seemed the right setting for a Depeche Mode show.

Once the DM trucks hit the venue the transformation began, and fortunately someone turned the heating on.

The original plan was for a catwalk - and this was indeed ready - but the height of the catwalk would have restricted the view of the fans at the front by too much - so it was all packed away.

After a few last minute tweaks - including hanging a special speaker just for the VIP section, and some black curtains here and there things were looking perfect!!

6pm and the doors opened - and the several hundred fans that had been waiting outside began to feel their fingers and ears again - as it was particularly chilly outside.

Within about an hour the place was impressively filled, and the total attendance was somewhere in the region of 18000.

The show was very good, the newly added "World In My Eyes" sounded excellent, and "Sister Of Night" was also a fantastic addition.

The fans were a little late with their "Home" chant - but they got there in the end, and Dave congratulated them for their "valid attempt" (Dave's words, not mine).

At the mixing desk I was introduced to the lovely Mike and Sandy - two American fans who have travelled across Europe seeing the band. Geneva was their 16th show , and by all accounts not the last.

The band are in Valencia next, and a hotter climate!!