I have seen Depeche Mode at this venue a lot of times through the years, I was curious to see how they had done up the venue since it was re-branded as the LG Arena.

The old system used to mean you had to wait inside what was essentially a huge warehouse - to then be let in the arena once they had checked your tickets - the new way is to relax in the elaborate hall, complete with bars, food counters, large TV's on the walls, and 2 tunnels leading to the Arena? I guess someone thought that having 15,000 people standing around brings in no money? 15,000 people standing near Food and Drink stalls might just bring in a bit of money, and I guess it did, as the place was rammed with people taking advantage of the facilities.

The Arena has been jazzed up a little, the seats are now all black, as is most of the interior, a few little VIP sections have been added, overall it's a great venue.

The Mexican waves started around 8.45pm, and the band hit the stage at around 9.10pm - and the place erupted. The performance from the band was faultless, but I must say the Birmingham Crowd were a quiet bunch for a lot of the show. Even Mr Gahan told them to "put down what you are smoking" as they were a little too relaxed - but the band won through and the last third of the show got a great reception.

I remember on the last tour thinking the Manchester Audience were alot better - so fingers crossed for Friday!!

Next stop is London for me, and the welcome return of Fellow Tour Blogger Peter!! 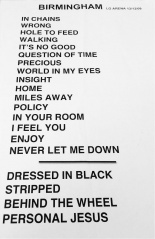