At the recent O2 gigs in London the guest list was a beast - and the passes ran out - which lead to a huge tightening up operation in Manchester.

Certain coloured passes were withdrawn and the Security staff seemed a little confused as to who should be going where and doing what.

I brought the family (again) to this show, and their expectations were high as I had told them Manchester was always a great crowd, I hoped I was going to be right. The catering crew cooked up a fantastic Xmas dinner, and Xmas gifts were being exchanged - the atmosphere was great within the DM Camp, just one more show......

Fortunately I was more than right about Manchester - the crowd were amazing, and Dave's "glad we are out of London" comment was definatly right - they were the perfect audience.

As the show progressed it became clear that this was getting better and better, I haven't seen so many coloured balloons floating around during Policy Of Truth, and the "Home" chant was the best I can recall.

You guys need to get some balloons for the 2010 shows and get them floating around for "Policy Of Truth" - a bit of audience participation is always fun !!

The after show was a particular highlight for me, I have seen many of these over the years and always enjoyed them, but tonight's was special - a rather intimate affair hosted in the bands "chill out room" with my 2 kids playing Table football with Junior Gore and Junior Fletcher - nobody knew the score, as the rules kept changing - but it was fun to watch the events unfolding with Martin. Everyone was in high spirits - despite the freezing temperatures outside. After wishing everyone a Happy Xmas we left and I felt very glad to have gone to Manchester.

This show was the last on the tour for The Soulsavers, and I hope you will agree they have done a great job, and have gone down really well with the crowds. I think everyone deserves a break and all involved have worked so hard to bring the Tour to you - let's hope the 2010 shows are a half as good as the 2009 shows have been.

MM, Petertoo, Daniel and Big Pete wish you all a happy Xmas and fantastic New Year and look forward to bringing you the Tourblog in 2010. 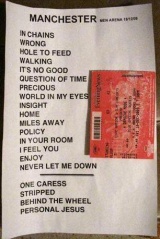